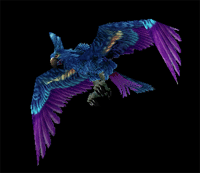 Parrot Cage (Hyacinth Macaw) teaches you how to summon Hyacinth Macaw, a parrot companion. It was the first epic-quality companion obtainable outside of the World of Warcraft Trading Card Game. The second one was

[Crawling Claw], which is only obtainable through Archaeology.

Prior to patch 8.1.5 changing its quality, this item was the only tradable epic companion.

Parrot Cage (Hyacinth Macaw) has a small chance of dropping off any mob in Northern Stranglethorn and The Cape of Stranglethorn. The drop rate has not been published, but it is estimated to be extremely low.

It also has a chance to be listed on the Black Market Auction House by Breanni, for the opening bid of 1,000

The jungle trolls train these birds to mimic calls for help in order to lure unsuspecting travelers into traps.

This companion used to only drop from the various Bloodsail pirates in Stranglethorn Vale. Its drop chance was extremely low—some estimated it to be as low as 1 in 10,000. Because it dropped only rarely from a limited pool of mobs, it was notoriously difficult to farm and could sell for tens of thousands of gold on some realms (new players sometimes mistakenly sold it for a low price on the auction house; it was later changed from common to epic quality to help prevent this). In patch 4.0.3a this companion became a zone drop, presumably making it easier to obtain and lowering its value.