For a fix for a software program, see patch. 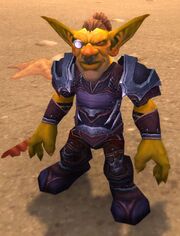 Patch is the leader of the Gob Squad, a group consisting of only goblins. The members of the squad are Grit, Newt, Ticker and Volt.

He is also present in the Secrets of Ragefire and in Nazmir.

Circling Highbank in The Skyshredder

The subject of this section did not make it out of the beta stages of World of Warcraft: Warlords of Draenor.

"Let's clean this up and get these boys out. I've got another operation waiting."
Find flanking positions.
Move out.
Squad, move.

<Make a series of complicated hand gestures.>
Newt says: You want me to steal third?
Patch looks confused.
Newt says: Was that... Yoga?
Grit says: Leading under the influence...
Ticker says: Now that's just rude...
Ticker says: What did you just call my mother?
Volt says: I don't think that's physically possible, sir.
Volt says: Sir, I think the explosions and gunfire gave us away. You don't have to use hand signals.
Grit says: What the heck was that?

The Alliance are gonna regret trying to ambush us through a nightmarish swamp filled with blood trolls and monsters!