Patch 1.6.0 ("Assault on Blackwing Lair") was a major content patch for World of Warcraft. Among other changes, it featured the release of the Blackwing Lair raid instance, the introduction of the Darkmoon Faire to Azeroth, Battlemasters in major cities, and revamps of the Warlock and Warrior talent trees. 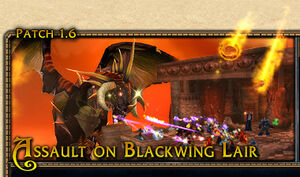 Nefarian's sanctum, Blackwing Lair, can be found at the very height of Blackrock Spire. It is there in the dark recesses of the mountain's peak that Nefarian has begun to unfold the final stages of his plan to destroy Ragnaros once and for all and lead his army to undisputed supremacy over all the races of Azeroth. Blackwing Lair is a max-level, 40-player raid dungeon, with many new encounters and tempting rewards awaiting the intrepid adventurer that dares enter its halls.

A gathering of the exotic from around the world and beyond, Silas Darkmoon has brought together the Darkmoon Faire as a celebration of the wondrous and mysterious found in Azeroth. While the Faire spends most of their time in parts unknown, they do stop from time to time in Mulgore and Elwynn Forest. When the faire is on its way barkers will stop by Orgrimmar and Ironforge to announce its arrival.