For the novel by Christie Golden, see The Shattering: Prelude to Cataclysm. For the Cataclysm event, see Shattering.

Patch 4.0.3a, "The Shattering", is a pre-Cataclysm content patch that updates the old world in preparation for the expansion's release.

This patch is the only patch in World of Warcraft history to be re-released. The original US patch on November 22nd was missing a key skin for boats, so users who patched with the ~20MB version were unable to use any boat. Users who patched in the evening of November 22nd were unaffected as Blizzard had added the missing skin to the patch (~130MB). Unfortunately the streaming client couldn't differentiate between the two separate versions, so on November 29th, this issue was resolved by re-releasing the entire patch to the entire US userbase, followed on November 30th to the EU userbase, with additional content (~162MB). This re-release also released a bug fix for users experiencing disconnection issues on entering a new zone.[1][2]

The Shattering of Azeroth 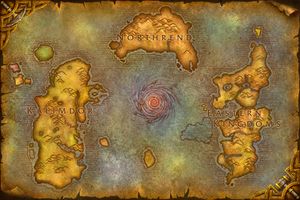 Azeroth after the Cataclysm.

In the frigid wastes of Northrend, the final battle against the merciless Lich King ended in victory for Azeroth's defenders. Upon returning home, veterans of the unforgiving conflict against the Scourge were showered with praise for their valiant sacrifices, while the honorable dead were mourned. Yet as hope flared anew in the wake of the Lich King's fall, Azeroth's native elemental spirits grew confused and erratic, setting off a series of deadly natural disasters. Horde and Alliance leaders scrambled for clues about the troubling state of the world, but nothing could have prepared them for what was to come.

Without warning, the corrupted Dragon Aspect, Deathwing, erupted from the stone heart of Deepholm, the domain of earth within the Elemental Plane. Jagged fissures were torn across the earth, and monstrous waves pummeled coastal regions. From Thousand Needles to the Blasted Lands, the surface of Azeroth was reforged through violent upheavals. Now, the Horde and the Alliance must defend their homes against Deathwing and his minions, burdened by the unsettling fact that the world as they know it has changed... forever.