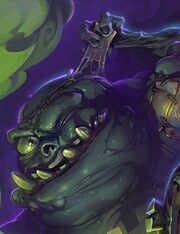 Patchwerk in World of Warcraft.

"Behold, Patchwerk. When word of his existence first reached the ears of the Brotherhood, none believed the tales of an abomination with such immense speed and strength. Fewer still believed it when he fell the first time..."
- Commander Eligor Dawnbringer

Patchwerk is the first boss of the Construct Quarter in Naxxramas. He is typically seen as a gear check, and is a prime example of a tank and spank fight.

Patchwerk was called to Acherus to put down the Knights of the Ebon Blade's insurrection after they broke free of the Lich King's control.

During the Scourge resurgence, Patchwerk was one of the undead forces reanimated by Mawsworn kyrian in the Sanctum of Reanimation in Icecrown.

Defeating Patchwerk depends on sustaining heavy DPS and managing Hateful Strikes. Without sufficient damage, Patchwerk's enrage will eventually destroy the raid. Without dealing with Hatefuls, Patchwerk will rapidly kill the raid's melee; losing these members will likely put the rest of the raid in an impossible situation. However, dealing with these two concerns will make Patchwerk an easy fight.

Off-tanks are the safest approach to Patchwerk's Hateful Strikes. These tanks will have enough health and generate enough threat to shield the less armored melee from Patchwerk's attack. Since Hateful Strikes are physical damage, the off-tanks' avoidance and armor will reduce the actual damage taken. This also simplifies the task of healers, as Hateful Strike targets will be very predictable. Note that in 25 player mode, two off-tanks will be needed to fully protect the melee members. The target of Hateful Strike is determined by three requirements:

If necessary or convenient, raids may substitute a DPS member in place of a dedicated off-tank. If low DPS is a problem, this compromise of security for damage may be prudent.

Assuming you have 2 tanks, it is advised to let your "best" tank (the one with most health and armor — dodge is useful) be the Hateful tank, and have your lesser geared tank take Patchwerk's normal hits.

Patchwerk is linked to the other enemies in his hallway, so these enemies will need to be cleared before Patchwerk is engaged. Once the room is clear, Patchwerk may be pulled.

Frenzy is a brief, but significant, increase of Patchwerk's damage. A raid with the minimum DPS necessary to kill Patchwerk will endure Frenzy for about 18 seconds. Emergency cooldowns, such as

[Survival Instincts], should be used to offset this buff. These cooldowns should cover the almost all of Frenzy, but if the raid has dead or OOM members, healers must be ready to offset this damage for a longer period.

Patchwerk will enrage after six minutes of combat. This enrage is not survivable, so raid DPS must be sufficient to kill Patchwerk before six minutes is up.

For 10-player, the raid must put out at least 12,000 DPS to beat the enrage timer. For 25-player mode, the DPS requirement comes to 36,200. In both modes, this translates to roughly 2,000 DPS per damage-dealer to defeat Patchwerk. These requirements will be slightly lower in practice since tanks will contribute DPS as well.

As in full-size raids, the entire room must be clear, starting from the central landing area all the way to Patchwerk itself. Lightly-armored players must be aware that, even at level 90, Patchwerk hits incredibly hard, so defensive cooldowns are imperative. Self-heals help, but the encounter can be won without it. Pull and use all offensive cooldowns immediately. Patchwerk uses the same abilities from full health to death, so there are no phase transitions to be aware of. All that matters is all-out DPS. Consider kiting at 5% health, as Patchwerk will Frenzy for more damage once he falls to that level.

[Healthstone] is available, use it as soon as Patchwerk does 20% damage. Bandages are a waste of time, as the channel will be interrupted as soon as Patch takes a swing. Any other form of damage mitigation, like

[Power Word: Shield], or anything similar is incredibly useful. Buff up before the pull, and engage a second or two before the cooldown/debuff expires so it is ready to use as soon as the shield breaks. Classes with HoTs should have them rolling on the pull and refreshed constantly.

Aggro
Why you want hurt Patch?

Killing a Player
No more play?

Death
What... happen to-

Killing A Player
No more play?

Death
What... happen to-

Warfront Warlock POV on Patchwerk by War Front, Frostmane US