For lore about peasants, see Peasant.

Peasants are the people of the Kingdom of Azeroth. Being of sturdy and hardworking stock, they will harvest the forests for necessary woods, or mine for gold in the hillsides as needed. Often times they gather in the Town Hall, and there is always a large supply of them willing to assist in your fight against the Orcs. They are also skilled craftsmen, able to construct any type of building you could desire. They are unskilled in the ways of war, however, and will flee when engaged by the enemy, often ignoring a safer route for a faster one.[1] 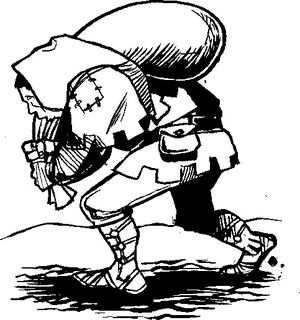 A Peasant as seen in the Warcraft: Orcs & Humans Manual.

Peasants are the basic workhorse of any army. While they can't attack enemies, they can harvest gold and lumber or build and repair buildings. They are quite weak and vulnerable, and must be protected at all cost. If under attack, the Peasant will keep fleeing from the danger until he meets an obstructive object, in which case he will get stuck and wait to die. Always make sure that the Peasants have a safe pathway between the Gold Mine/forest and the Town Hall. Also, make sure that the Roads to the Town Hall are wide enough for multiple Peasants to pass through, otherwise an incoming Peasant will bump into an outgoing Peasant and both of them will get stuck while also blocking the Road.