For other versions, see Peon (disambiguation). 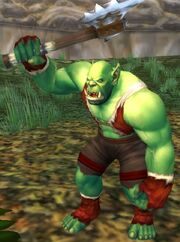 Peon in World of Warcraft.

“All muscle and no brain, that's what peons are! They're great when you can motivate them, but they have to be 'kick' started, if you know what I mean.”

Peons are the laborers, workers and lumberjacks of Horde and the orcish clans. They are typically unfit for battle, cowardly and lazy but their work is simply indispensable for the other orcs to focus on battle. This is why the importance of the peon is recognized in the holiday Peon Day. Physically most peons are permanently bent from years of labor and trudge expressionlessly in their duty, a large sack slouched over malformed shoulders that are broader than any soldier's.

Peons appeared as units on the orc or Horde side in Warcraft I, Warcraft II, and Warcraft III and were voiced by Bill Roper. They are the classic counterpart to peasants.

The lowliest of the Orcs, these dogs were good for little more than rough work. They were commanded to cut wood or mine the pits for gold. They also made strong laborers in the construction of all manner of buildings. They were all cowards, and would run like little children if attacked.[1]

The label of peon denoted the lowest station amongst those in the Orcish Horde. Inferior in all skills of import, these dogs were relegated to menial tasks such as harvesting lumber and mining gold. Their labor was also required for the construction and maintenance of buildings necessary to support the vast undertakings of the Horde. Downtrodden, the orc peons slaved thanklessly to please their overseers.[2]

During the Invasion of Draenor, the Sons of Lothar captured and interrogated some peons of the Horde of Draenor that Ner'zhul had sent against them as cannon fodder to delay the Alliance.[3]

The label of Peon denotes the lowest station amongst those in the Orcish Horde. Inferior in all skills of worth, these dredges are relegated to menial tasks such as harvesting lumber and mining gold. Their labor is also required for the construction and maintenance of buildings necessary to support the vast undertakings of the Horde. Downtrodden, but exceedingly loyal, the orc peons toil endlessly to provide for the greater Horde.

Pity the poor peon, working from dusk to dawn, slaving away in the service of orc and Horde.

Commonly treated with contempt, the wise Thrall knows that without these sturdy little guys, the Horde war machine would grind to a halt. They are nearly worthless in combat, which is why they prefer to hide in Burrows and throw spears out the windows, if it comes to that.[4] 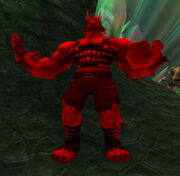 As their manual description evolved over time, it seems that in the modern Horde peons are treated in a slightly gentler manner than before, an effort which could presumably be attributed to Thrall, as was the case in the non-canon RPG. Peons are often under the watch of foremen,[6][7] overseers,[8][9][10] or overlords,[11] who ensure that they don't get too lazy or complacent, in which case they are punished using blackjacks[12][13] or booterangs. Peons are, as such, sometimes unhappy with their situation,[14][15] and sometimes gather enough self-confidence to try to progress in life.[16] For example, Murg Stonecrack is a former peon who was promoted to the rank of mining trainer and allowed to boss around other peons.

After the end of the Fourth War, Foreman Magrok in the Twilight Highlands got angered by the way peons had been treated and demanded that the Horde gave them more respect and better working conditions.[17]

Most peons still have the same soundset and quotes as in Warcraft III. Interestingly enough, many peons all over Azeroth, Outland and Draenor also share the same face, maybe a nod from Blizzard to the fact that many Alliance peasants share the same model.