Peroth'arn is the first boss to appear in the Well of Eternity instance.

Peroth'arn was a fellow Highborne and friend of Xavius. He was the first person given the "gift" of becoming a satyr by Xavius. He had a mate, and a villa.[2] 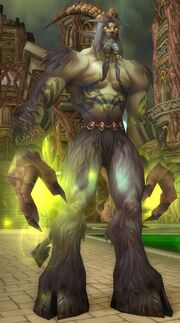 Like many of his fellow Highborne, Peroth'arn swore allegiance to the corrupted Xavius in exchange for gifts of demonic power. As a master of fiendish magic and recipient of the satyr curse, Peroth'arn stands outside Azshara's palace in defense of the Burning Legion, ready to destroy those hoping to disrupt the entrance of the Dark Titan, Sargeras, into Azeroth.

After Illidan interrupts Drain Essence, Peroth'arn returns to the shadows to ambush the heroes. Peroth'arn unleashes his Eyes of Peroth'arn to search for the players. Players gain the protection of their Shadowcloaks to help them avoid the detection range of the Eyes.

If players avoid detection for 40 seconds, Peroth'arn becomes visible and weakened with the Enfeebled effect.

If an Eye of Peroth'arn discovers a player, Peroth'arn marks the player with Easy Prey, leaps out of the shadows, and attacks the discovered player.

The tank should engage Peroth'arn. The stacks of Corrupting Touch are mostly unavoidable. All players should avoid the puddles created by Fel Flames.

Fel Decay is going to cause >120000 damage to its target. The healer must judge whether a heal can be delayed until the debuff ends, or if the damage must be healed immediately (injuring the healer). It is mathematically similar to a 33% healing debuff so it is a subject of concern, not panic.

When he vanishes and sends out the eyes, players should run to avoid the eyes. If a player is detected the tank will have to taunt periodically because Peroth'arn appears to like to switch to the Easy Prey victim.

Intro
He is near, lurking in the shadows... I can sense it.
You, Felguard. Hold this area.
The rest of you, secure the courtyard.

Aggro
Peroth'arn says: No mortal may stand before me and live!
Illidan Stormrage says: Nothing will stop me! Not even you, Demon!

Get Seen
I can see you!

[Lazy Eye]
You hide well, worms. But how long can you delay your doom?

Endless Rage
ENOUGH! It is time to end this game!