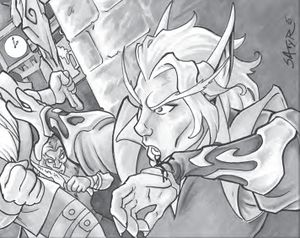 Petran is a high elf caster, formerly from Dalaran. He was a friend of Archmage Annan who had given him a knife just three weeks before Archimonde destroyed the magocratic nation. After its destruction Petran traveled to Kalimdor. One day after getting drunk in a bar in Theramore in a bad part of town, he insulted a group of dwarves. They beat him up for the insults, and rifled through his belongings. They planned to steal the knife that he had received from Annan. Afraid for his life, he prepared a spell to attack the dwarves knowing it would likely affect the relations between his people and the dwarves. In the chaos after casting the spell he was able to retrieve the knife and escape into the night. He didn't bother to check if any of the dwarves had survived, and was sure he had lit the pub on fire. He hid in the shadows and decided he would find out what life was like outside of Theramore.[1]