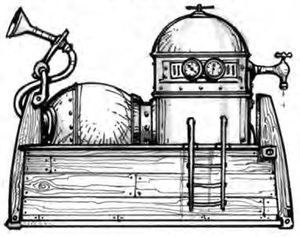 The first samples of phlogiston were collected in the labs of dwarven tinkers in Khaz Modan when dwarves used a vacuum pump to collect the superheated air over a kettle of molten iron. In the years since, the process has been much refined, leading to the development of the phlogiston collector.

This wagon-sized machine has a large intake valve to pull air into a reserve over a glowing crucible. Once the device separates and purifies the phlogiston, it bubbles it into a mixture of oil and water to capture it. The machine then siphons the liquid into glass vials. These vials of liquid phlogiston serve as the fuel for many devices.

Phlogiston collectors are temperamental and require constant supervision. If they collect too little phlogiston gas, the water content of the liquid phlogiston is too high and devices won’t operate properly. If too much phlogiston gas is collected, the crucible inside may start to react with the gas, burning white-hot until the entire collector melts into slag and the collected gas explodes[1].