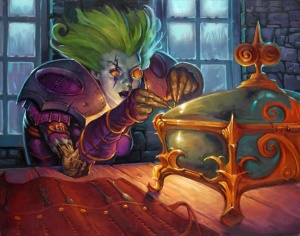 Pick Lock is a level 25 rogue ability that allows a rogue to open locked chests, doors, junkboxes, and lockboxes. A rogue's Pick Lock skill is equal to 5 times their character level; for example, a level 30 rogue may unlock items requiring a skill level of 150 or less. Rogues can verify their current Pick Lock skill by viewing its tooltip.

Before Patch 4.0.1 rogues could learn Pick Lock at level 16. You began with a Lockpicking skill level of 1 and were required to actively train it by picking locks. The amount you could train was capped at 5 times your character level. For example, at level 16 you could train your Lockpicking skill from 1 to 80; in order to train beyond 80 you would need to reach level 17, at which point you could raise your skill level to 85. Like profession recipes, locked items were color-coded to indicate the probability of a skillup upon being unlocked (the colors are still in the game, but are purely cosmetic).

Alliance players could obtain the quest

[20] Alther's Mill in Redridge Mountains and begin training their lockpicking using the Practice Lockboxes that spawn in the mill. Horde players had a similar quest,

[18] Plundering the Plunderers, which gave them to opportunity to practice on Buccaneer's Strongboxes aboard a ship off the coast of Ratchet. Blood elf rogues could pick up

[18] Greed, which tasked them with unlocking Burial Chests in the Ghostlands catacombs. All these quests still provide

[Thieves' Tools], which were required to pick locks prior to Patch 3.0.2, but now have no use. Instead of venturing to questing areas, rogues could also begin their training using

At higher skill levels rogues were generally required to find chests and doors to train on, which were often guarded by mobs. Rogues could talk to their rogue trainer for recommendations of areas containing footlockers corresponding to their skill level. Rogues could also

[Pick Pocket] mobs and unlock any junkboxes they found. Alternatively, a rogue could offer free lockpicking services to other players in the hopes of leveling it, and some even paid for skillups.

[Dark Leather Gloves], crafted by leatherworkers, used to increase lockpicking skill by 5, but they no longer seem to provide this benefit.