From Wowpedia
(Redirected from Pig Farm)
Jump to: navigation, search 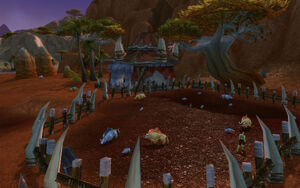 The Rocktusk Farm in Durotar.

Pig farms are a staple of orcish society, trapping, breeding and raising the numerous boars required to feed the hungry members of the Horde. Not all orcish farms are about raising boars but they represent the majority of them.

Farms produced the grains and animals needed to keep the encampment and the army well fed.[1]

While they are not strictly described as pig farms, the orcish farms of the First War were already probably offering an ample amount of boar meat to the troops of the Orcish Horde.

Farms provided the necessary raw foodstuffs to sustain both the slave labor force and the war parties in the field. Without a sufficient food supply, new units could not be acquired. The staple diet of the Orcs - along with their kindred Troll and Ogre brothers - was fresh meat. To satisfy this hunger for flesh, wild Boars were trapped and bred for food. Readily abundant in most regions, they had became a bonfire favorite (along with a tankard of Bloodmead) among the hardened troops engaged in a long war march.[2]

Their function was replaced by the burrows, but pig farms could still be seen in the Eastern Kingdoms[3], Kalimdor and Outland.

After the Third War, Thrall's forces continued to use both pig farms and burrows. As such, pig farms can be found all throughout Azeroth, Outland and Draenor. Some orc fortresses, like Warsong Hold, also come with their own pigsties, and Stonemaul Hold has one as well.

Moaoto is a Broken pig farmer, alongside Farmer Leon.

Zukaza was a boar farmer.