A Pink Elekk is a pink colored elekk that is a hallucination. Pink elekks are only visible while the player character is drunk from alcoholic beverages.

Pink elekks are found around Allerian Stronghold and Stonebreaker Hold. 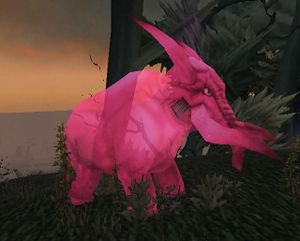 The side of one.

Per these two quest, the pink elekks were visible in the beer garden celebrations outside of most of the major cities: "Visit the beer gardens outside of Stormwind, Darnassus, and the Exodar, zap three elekks at each location" (Alliance) and "Visit the beer gardens outside of Silvermoon, Thunder Bluff, and the Undercity, zap three elekks at each location" (Horde). However, though the quests to "disperse" them have been removed, the pink elekks were not removed and are still visible in their Brewfest 2007 locations just as the Wild Wolpertingers are still around, although the quests to catch them are also in hiatus.

Per the quests, they are "dispersed" with an [Elekk Dispersion Ray] and cannot be engaged normally (otherwise you would not need to use the quest item to disperse them).

Seeing pink elekks when you are drunk is a reference to the expression, 'seeing pink elephants', a euphemism for for drunken hallucination. The expression was an inspiration for the Pink Elephants on Parade musical segment in the Disney movie Dumbo where in the main character accidentally gets drunk and hallucinates about pink elephants; you might assume that many players will catch the connection to Disney rather than Jack London.