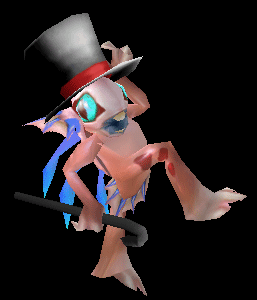 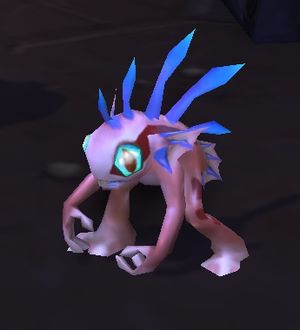 The Pink Murlog Egg item teaches you to summon Gurky, a pink baby murloc Companion that follows you around.

The Pink Murloc Egg access code was given as a prize for several European contests over Christmas 2006.

How to obtain: (Alliance)

How to obtain: (Horde)

Gurky is a born performer, though she remains elusive, making public appearances only on the rarest of occasions.

Notes about redeeming your code for Gurky

From Blizzcon 2007 through sometime in the first half of 2008 both Ransin Donner and Zas'Tysh wore a murloc costume.

Currently, in dialog, neither Ransin Donner nor Zas'Tysh offer to redeem the code for Gurky as of June 6, 2008.

Many would say that the Murlocs are filthy, slimy creatures with no greater purpose in life than to serve as expendable sparring partners for aspiring heroes. Do you believe this? Think again! Mindless killings and raids on their homes have left thousands upon thousands of Murlocs dead or wounded, and each day the slaughter continues.

Have you ever invaded a Murloc settlement and drenched your blade in their green blood? Have you ever ended the life of one of these poor, defenseless creatures as it was desperately trying to escape back into the safety of a nearby river or the sea, the Murloc's true home? Yes? Then it is time you made up for the pain and suffering you have caused these gentle animals!

Through the Murloc adoption program you will have a chance to get to know these fascinating and playful creatures from a whole new perspective. Many young Murlocs are left without their parents as pillaging gangs of so-called heroes eradicate entire tribes, leaving the unhatched Murloc eggs without protection against hungry crocolisks, raptors, and other dangers that threaten a young Murloc's life. Many kind souls have saved abandoned eggs from ravaged Murloc settlements, and you can help us hatch these eggs and care for your very own baby Murloc. If you have been given a special code that certifies you as a qualified Murloc handler, please follow the instructions below to turn in your code and to receive your new best friend in the World of Warcraft.