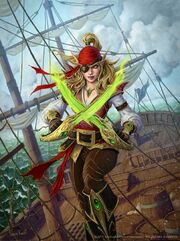 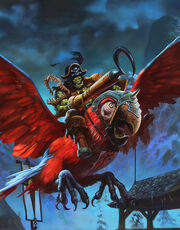 The term pirate now refers to a much wider selection of traits, and while several groups of criminals branded as pirates do sail the Great Sea and search for treasure, other factions prefer to remain secretive, reserving piracy for the inner ranks of their organizations. Needless to say, most pirates are considered less clean than your average sailor.[citation needed]

Many pirates have the buccaneer class, although not all pirates are buccaneers.[citation needed]

Areas directly under the control of pirates are Bloodsail Hold on Plunder Isle and Freehold in Tiragarde Sound in Kul Tiras.

Piracy is considered one of the most vile of crimes under Kul Tiran law. Those caught and charged with piracy are sentenced to death and publicly executed.[1]

Following the Second War and the Invasion of Draenor, Kul Tiran fleets patrolled the trade lanes hunting pirates and marauders on the high seas.[2] Azeroth's pirates raided one another in search of treasure, giving little thought to the risks they would undertake. The choice to create a pair of nimble cutlasses, Fate and Fortune, the sort of weapons favored on the high seas, meant that the eredar Talgath saw great potential in corrupting pirates to the Burning Legion's cause, including the Bellwether's crew and later a portion of the Bloodsail Buccaneers who splintered into the Dread Fleet.[3]

Over the years, many pirate groups have formed on Azeroth, operating in many coastal areas and most importantly on the open seas between the continents.

At some point after the Cataclysm, Feral Scar of Feralas "made a deal" with some pirates to transport his yetis and the Woodpaw gnolls to the Blasted Lands. The deal was that the pirate should help them unless they wanted to be pounded into dust by the yeti leader, so they agreed to give them ships.[4]

What follows is a list of pirate organizations within Azeroth.

The subject of this section did not make it out of the beta stages of World of Warcraft: Battle for Azeroth.

There are also pirate groups on alternate Draenor.