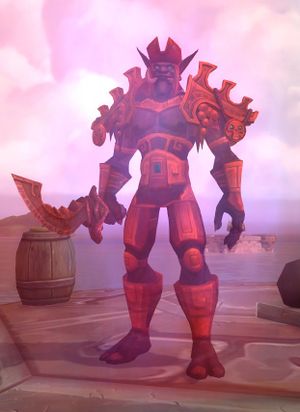 A vision of Zem'lan as he appeared in life.

Pirate-King Zem'lan is the tyrannical master of the Port of Zem'lan in Vol'dun, which he rules over with his crew of the eternal damned.[1] Ages ago, when the port was threatened by sethrak, Zem'lan cursed his crew into undead monsters and forced them to serve him for eternity.[2][3]

Long ago, Pirate-King Zem'lan was a good captain whose Zandalari crew served him loyally[4] as they sailed under his black flag.[5] Zem'lan claimed to "own" the black market, giving him first taste of anything that passed through the Port of Zem'lan.[6]

One day, the Port of Zem'lan came under threat from the Faithless sethrak.[2] Zem'lan knew that he did not have enough crews to win a fair fight, but he did not fight fair. Before long, First Mate Jamboya discovered a set of dark magical idols among the contraband caches. Witchdoctor Yoksa believed he could perform a powerful ritual with them and tested the idols on a refugee. Zem'lan was apparently greatly pleased by the results and was confident that if the sethrak set foot in his port, he would make them regret it for eternity.[6]

When a group of refugees pleaded with Zem'lan to let them onto his boats to escape the sethrak, he responded by shooting several of them and telling the rest that the only ones who would be allowed on his ships were the ones who could pay him gold. Since none of the refugees had any gold, he told them to get out of his port and die in the dunes where they belonged.[1]

Some time thereafter, First Mate Jamboya reported to Zem'lan of the approaching sethrak army. Zem'lan vowed that no one would ever take the port from him and told Jamboya to rally the crew to defend the port with their lives. When it became clear that the Faithless were too many, Zem'lan told Jamboya to gather the idols and round up the crew at an altar on the Golden Isle, despite Jamboya's protests.[2] Once at the altar, Zem'lan told his crew that they would hold their port forever. He then used the cursed idols to kill First Mate Jamboya and curse him into an undead skeleton, before doing the same to the rest of the crew.[3]

The curse corrupted Zem'lan, making him cruel and controlling. He began treating his underlings more like slaves than crewmates, forcing them to fight and die for his gain. They were never allowed to have any treasure for themselves, and they weren't allowed to speak up without punishment.[2][4][7] Zem'lan's favorite form of punishment for the crew is hanging them on the yard arm; since they can't feel pain and don't stay dead, his options are limited.[8] Zem'lan doesn't stay in the port with the rest of his crew, instead dwelling on the Golden Isle, a forbidden island where he hoards all of the treasure his crew has plundered, so only he can enjoy them.[9] Crewmates that try to take some of Zem'lan's loot for themselves are punished by being turned into mindless goldslaves and forced to tend to his treasures for all eternity.[9][7] Zem'lan keeps a gong at the top of the isle that any crew member can ring to challenge him to a fight. However, First Mate Jamboya has only ever seen one pirate brave enough to ring it, and it didn't end well for her.[10]

Eventually, a Horde adventurer arrives in the Port of Zem'lan and begins aiding Jamboya — who is riddled with guilt for his role in the crew's fate and bitter towards Zem'lan's treatment of his underlings — and several other crew members in committing mutiny against the Pirate-King. The group travels to the Golden Isle to confront Zem'lan directly, and eventually Jamboya and the adventurer ring the challenge gong at the top of the isle to face the Pirate-King. Zem'lan is defeated, but with his dying words he tells Jamboya that he will not stay dead for long.[10] Realizing the truth in Zem'lan's words, Jamboya and his crew head back to the mainland with the adventurer to seek refuge at Camp Lastwind.[11]