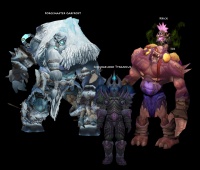 The Pit of Saron bosses

The Pit of Saron is the second wing of the Frozen Halls instances of Icecrown Citadel, released in patch 3.3. The enormous pit in the dungeon is filled with large extracts of saronite ore and the Scourge have taken many Alliance and Horde prisoners forcing them to mine the saronite or face torture and reanimation into undeath. The players help Jaina Proudmoore or Sylvanas Windrunner rescue the prisoners and put a stop to the Scourge's operations and defeat the brutal scourge master of the area and his lieutenants.

To become "attuned" to the Pit of Saron, players are required to complete the quest

[80D] Echoes of Tortured Souls in the Forge of Souls as part of the Frozen Halls story line quest chain.

Queuing for the Pit of Saron in the Dungeon Finder requires level 80 and that one's gear have an average item level of 180.

The Pit of Saron, accessible only to those who have laid waste to the Forge of Souls' unholy operations, will bring Horde and Alliance forces deeper into the Lich King's domain. Players who venture here will immediately be confronted by the lord of this lair, Scourgelord Tyrannus. But defeating him will not be as easy as it seems. Before they can present a threat to Tyrannus, the adventurers, instructed by their leaders, will need to free enslaved allies who have been trapped by the Scourge. Until that happens, Tyrannus will leave all adversaries to his minions, workers of the citadel's mines. Perhaps the challenges here will lend clues as to the whereabouts of the Lich King's private chambers outside of the Frozen Throne, deep within the Halls of Reflection.

Notably, it is the only Frozen Halls-dungeon which is visually located outside Icecrown Citadel instead of inside it, unlike the two other dungeons. The area which comprises the Pit of Saron is strikingly similar to other outdoor areas in Icecrown; the location of Forgemaster Garfrost looks like Malykriss: The Vile Hold, the location of Krick and Ick like The Fleshwerks, and nearly everything else like the Weeping Quarry. As the Scourge is planning to use the saronite mined in the other mines in Icecrown to build Malykriss, it is likely (although unconfirmed) that this is the case with the saronite mined in Pit of Saron as well.

During the Burning Legion's third invasion, the Sveldrek group of vrykul took control of the Pit until being defeated and raised by the Lich King's ally, the Knights of the Ebon Blade, into his servitude. 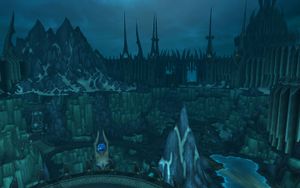 Forgemaster Garfrost
A master of Scourge weaponry, the forgemaster hauls stocks of saronite ore and other precious materials to the cold forges where the mechanisms of death are born. With a host of rime weapons and exotic alloys at his disposal, it could get cold in here.

Krick and Ick
Zombies serve as mindless muscle in the Pit of Saron's mines, stockpiling metals for Forgemaster Garfrost, and Krick -- a devious gnome necromancer -- supervises the operations from atop Ick, Krick's ghastly means of transportation.

Scourgelord Tyrannus
Tyrannus is a terrible force who will no doubt demonstrate his powers to those brave enough to enter the Pit of Saron. The scourgelord must die if players hope to make their way into the third and final wing of this dungeon.

As with the Forge of Souls, all trash mobs are soloable by most classes for those farming for

[Battered Hilt] or gold (about half will drop in excess of one gold). While the first two bosses are in out-of-the-way locations and easily skippable, both must be defeated to open the gauntlet cave leading to the Scourgelord. Some classes should be able to solo them.

For a brief time, between the introduction of Battle for Azeroth's Patch 8.0.1, the pit saw a number of weird bugs. The issues were fixed with the July 24th Hotfix, but a list containing many of the observed bugs can be found here.