Pixies are demigods resembling minute, sword wielding men with butterfly wings. They helped fight during the War of the Ancients.[1] 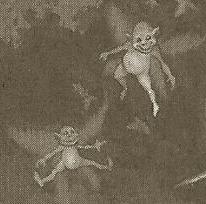 Pixies or Sprites as seen in the RPG book Shadows & Light

Pixies are a small race native to the Emerald Dream that share the world with a contingent of fey including sprites and the like.[2]