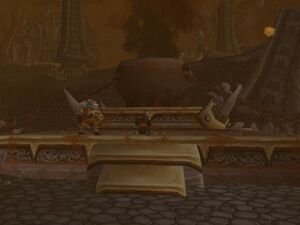 The plague cauldron in Deatholme, overseen by a Deatholme Necromancer.

Plague cauldrons (aka Scourge cauldrons) are giant cauldrons filled with the vile toxins and poisons of the Scourge. Infused with the necromantic sorcery of Kel'Thuzad, these cauldrons are constantly boiling and spewing the Plague of Undeath into the air; corrupting and twisting the land, and empowering the agents of the Scourge. Each of the cauldrons has its own unique mix of toxins and is guarded by a Cauldron Lord with a retinue of formidable Scourge soldiers. The vast forces that protect each cauldron make these landmarks the second largest concentration of scourge in the area, behind Andorhal. Recently agents in the employ of the Argent Dawn were able to defeat the Cauldron Lords, and gain samples of the deadly toxins, which are still used to this day by the Argent Dawn in a constant battle to try and counteract the deadly concoctions.

The enchanted cauldrons were masterminded by the necromancer Heigan the Unclean.[1]

In preparation for the siege on the north lands, the Cauldrons were moved to Kel'Thuzad's recent acquisition, the Barov Manor on Caer Darrow (Scholomance) where the Plague of Undeath was perfected within them. Using samples from the cauldrons, Kel'Thuzad began to poison grain shipments exported from Andorhal, thus dooming the populace of Lordaeron to the plague. After Arthas' final "purge" of the region, the cauldrons were ordered to be placed in the various fields around Andorhal by Araj the Summoner to help support the Scourge forces in the area. Whether this was a tactical decision (cleared, level ground easily protected), or an ironic monument to the beginnings of the Scourge (the cauldrons sitting in the very fields that produced the corrupted grain), is unknown.

The Scourge Cauldrons were located in the Dalson's Tears, Felstone Field, Gahrron's Withering, and The Writhing Haunt farms.

Death knights are tasked with aiding Noth the Plaguebringer in the creation of a Plague Cauldron at the Havenshire Farms. It is involved in the following quests:

The cauldron is no longer available after completing the quest

[55] The Light of Dawn, although it can still be seen in the ruined farm afterwards.

In Icecrown, there are several of what appears to be plague cauldrons mounted on wagons. These may be weapons of war used to spread the plague amongst enemy ranks during battles, or alternatively simply tools to help spread the plague across large areas quickly.