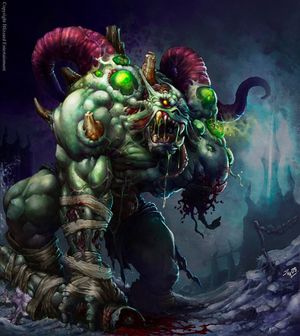 A plague eruptor in the TCG.

“Death by smashing or death by explosive poison? A lose-lose situation.”

Plague eruptors are a type of powerful undead that can mainly be encountered in Northrend. The latest experiment of the Lich King, plague eruptors are designed to spread horror and chaos across the world of the living. These hyper-violent, incredibly strong, and deceptively fast walking corpses have quickly earned a reputation as the most destructive of the Scourge army. The most terrifying weapon in the eruptors' arsenal are the myriad pulsing nodules that dominate their rotting skin and from which the undead plague festers and burts, ensuring that the eruptors spread the Lich King's apocalyptic contagion wherever they go.[1]

The plague eruptors roaming around the Warsong Farms Outpost were once orcs and tauren.[2] 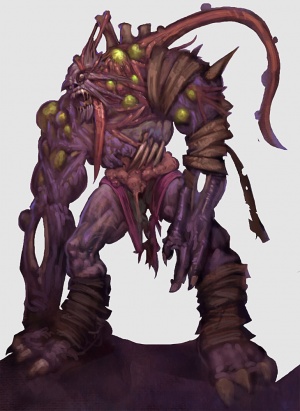 Artwork of a plague eruptor.