This article is about the Scourge plague. For the new Forsaken plague, see New Plague. For other uses, see Plague.
“Friends turned into foes; life into death that yet was not. There could be no hesitation, no mercy, no quarter. This was the plague. This was sorcery of a wickedness that only one such as Gul'dan could have conceived of, yet Gul'dan was long dead.” 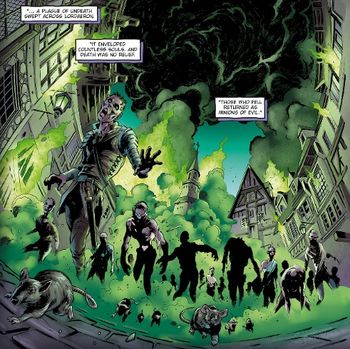 The Plague of Undeath in Hearthstone.

The Plague of Undeath[1] (blight[2] or simply the Plague)[3] is a magical affliction first conjured by Ner'zhul, the Lich King (under the direction of the demon lord Kil'jaeden), from his icy prison within the Frozen Throne in Northrend in order to create the Scourge. The Scourge was intended to be a vanguard for the Burning Legion, Ner'zhul's captors, during their attack on Azeroth.

The creation of the Plague took some time before and during the Third War. Using his will alone, the Lich King spread the mystic disease to human settlements of Northrend killing them and causing them to rise again as undead under the influence of Ner'zhul.[4] Yet, the nerubians proved immune to the plague.[5] After the wizard Kel'Thuzad answered Ner'zhul's psychic call, he was tasked with containing the Plague and transporting it across the sea to Lordaeron, where it was used to infect food supplies and distributed to the populace under the supervision of the dreadlord Mal'Ganis, an acting lieutenant of the Burning Legion. Kel'Thuzad first had to gather a cult of followers to aid him in the spreading of the Plague, and for this he established the Cult of the Damned.[6] In Scholomance, the Barov family servants were used as experiments for the plague,[7] before it was unleashed to kill every habitant of Caer Darrow.[8]

With the aid of his cultists, Kel'Thuzad and Mal'Ganis used the agricultural hub of Andorhal to ship Plague-infected grain to the surrounding towns within Lordaeron which included Brill and Stratholme. Those contracting the Plague typically die within three days, rising shortly thereafter as feral zombies easily controlled by the Lich King's immense psychic power. After successfully destroying the infected granaries, Prince Arthas, fresh on the heels of Mal'Ganis, came to Stratholme to find it already infected by the tainted grain. Knowing that the citizens would soon turn into the cursed undead, he proceeded to slaughter them all, against the council of Uther the Lightbringer (Arthas' paladin mentor), in order to prevent them from bolstering Mal'Ganis' ranks.[9]

Before becoming a death knight in the servitude of Ner'zhul, Arthas succeeded in destroying all of the sources of the Plague, leaving no way for them to further spread the disease. 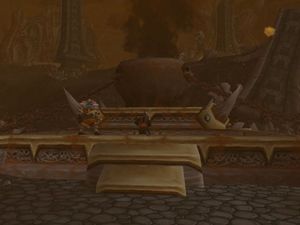 A few years later, after the Scourge had built a considerable presence in the Plaguelands, they set up a series of massive cauldrons with which they continue to spread the Plague directly into the air, corrupting the land itself as well as the local wildlife. The Argent Dawn, a regime dedicated to the eradication of the Scourge menace, have discovered ways of sabotaging these cauldrons and reversing their effects, thereby purifying the chemicals within and making them toxic to the undead.

Apothecaries of the Forsaken were working on producing their own New Plague, which would have a similar effect as the original Plague, but will kill undead creatures as well as living ones. This will allow the Forsaken to destroy all their immediate enemies, the Scourge, the Scarlet Crusade, Dalaran and the remnants of Lordaeron. Experiments on this New Plague have been conducted by Apothecaries in Brill, the Sepulcher, Tarren Mill, and Shattrath City.

The days before the Zombie Infestation began, plagued grain crates started appearing in the capital cities of Azeroth because of the actions of the Cult of the Damned.

During the Scourge Invasion, the Forsaken dealt with curing the plague while the Church of the Holy Light pledged itself to destroy the Scourge's necropolises.[10]

The Forsaken New Plague (also known as the Blight) was refined during the war in Northrend and used by a rebel faction of Forsaken (mostly made up of members of the Royal Apothecary Society and led by Grand Apothecary Putress) against the Horde, Alliance and Scourge forces during the events of the Angrathar the Wrathgate. In the aftermath of the rebellion the Horde has prohibited the usage of the full strength Blight.

Apothecary Dithers, under orders of Lindsay Ravensun,[11] took samples of the original Plague from the diseased bears of Western Plaguelands and created plague drums. These drums were deployed as bombs to kill the farmers in Felstone Field and undo the healing achieved by the Argent Crusade and Cenarion Circle.[12][13]

Nature of the Plague

Through the course of his experimentation, Ner'zhul insured that the affliction would specifically target humans for "undeath". Long term affliction of the plague causes a certain reanimation of activity in the dead, as if the corpse is waiting for further commands. Those who die by the plague are only lying dormant in their graves, awaiting one skillful in necromancy to awaken them.[14]

Though non-human races and creatures (and even the land itself) were susceptible to the Plague, it was humanity in particular that Ner'zhul meant to scour from the world. As a result, infected flora and fauna reacted differently — symptoms ranged from fatigue, nausea, fever, to minor hallucinations, but rarely resulted in death. Diseased and decaying but not truly undead, these beings were not under the thrall of the Lich King. Hence, while undead representatives certainly do exist among the ranks of the non-human races, these particular agents are examples of undead created through necromancy rather than the Plague.[15] An example of the Plague turning a non-human creature into undead is that of the skeletal horse.[16]

One of the few creatures that thrives in the Plaguelands is the carrion grub.[17] They can reach huge sizes and are immune to the Plague. A prime example of a carrion grub is Borelgore. The Plaguelands also have heavy populations of massive mushrooms which also seem to thrive in these conditions.

Jaina and Arthas speculated that the Plague contained demonic energy while investigating its initial spread across Lordaeron.[18] They noted that the land around the contaminated grain had the life sapped out of it, exhibiting a similar effect found on Draenor and the Blasted Lands. Ner'zhul's Plague was a life-draining sickness[19] and victims of this Plague became limned with a sickly, green glow[20] characteristic of something tainted with demonic energies.[21]

During the War of the Ancients a mushroom created from demonic mist[22] infected people with a different type of plague that caused its victims to grow exploding pustules before killing them moments later.[23] This plague did not resurrect its victims.

The Plague, while established many times as a very powerful affliction, was proven to be curable at least once. During the end of the Zombie Infestation World Event, the Alliance and Horde managed to find cures to the Plague, even if the converted zombies themselves could not be saved.[24]

The Plague can not be healed or weakened by individual means, with the exception of the Holy Light (regarding weakening the affliction).[25]

Be wary, child, of Plaguelands plain...
Be mindful, child, of the infected grain...
For if throat is parched and of infected water sip...
Forever your soul will be in cursed Scourge grip.
So heed this warning, child, and if far from mother stray...
Let light from home's hearth guide you back your way.

—Human nursery rhyme, already in use six years after the Third War[26]

The Plague was originally cast and controlled psychically by Ner'zhul.[4] There are no large fungal growths around the Frozen Throne or the human settlements in Northrend hit by this version of the Plague, but there might be evidence that the Plague of Undeath eventually became fungal in nature in the form of Plaguewood, where clouds of what look like spores emanate from the colossal mushrooms in the area, whose growth may be linked to the Plague. Growths on infected plants and animals also would make this possible. Early infections could have been mostly due to ingested grain, but proximity does not appear to be infectious.

Drinking from tainted water sources, such as the Thondroril River near Andorhal before the Cataclysm, can also cause infection.[26] The Plague may have either evolved over the years to influence the growth and size of lifeforms, such as the carrion worms and mushrooms. Plants and animals tend to grow when exposed to fel magic.[27]

In the Legion version of Acherus: The Ebon Hold, a few of what seems to be plague cauldrons can be seen (specifically near Salanar the Horseman). It is possible that the Knights of the Ebon Blade have begun brewing their own, that the Lich King is now resupplying them with it, or it is something else entirely. Thus far it has not been shown to have been used by the Ebon Blade against the Burning Legion.