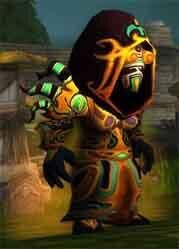 Most tier 3 items can be acquired through quests given by Mataus the Wrathcaster, who can be found in Light's Hope Chapel in the Eastern Plaguelands. Before the quests become active, Echoes of War must be completed.

The quests require several crafting materials, [Wartorn Cloth Scrap]s (which drop from trash mobs in Naxxramas) as well as a token from a boss in Naxxramas

The only exception is the [Plagueheart Ring], which drops directly from Kel'Thuzad in Naxxramas.

All pieces of this set have a random chance to appear on the Black Market Auction House.

All quests to obtain this set have been removed.

The quests to obtain the set are still available and able to be completed if the player has all necessary items. Ring is not available.