The Plaguelands, originally called the Eastweald,[1] and sometimes including all of the Northlands (that is globally composed by the northern regions of Lordaeron), are the regions that were most corrupted by the Scourge during the Third War.

Before being called the Plaguelands, the northeastern reaches of the Kingdom of Lordaeron were known as the Eastweald. The region sometimes includes the Tirisfal Glades. The Eastweald was a stretch of fertile foothills located east of the Tirisfal Glades. During the Troll Wars, military leaders from Arathor constructed "crude" forts throughout the Eastweald prior to the kingdom's direct confrontation with the Amani Empire around 2,800 BDP. After the war, those forts would become populated trading centers from which many modern cities would spring.[2] The settlements built on the Eastweald like Light's Hope Chapel, Stratholme, Andorhal or Tyr's Hand were the most important holy sites of the Church of the Holy Light in Lordaeron.[3]

Just before the Third War, Kel'Thuzad directed the Cult of the Damned to unleash the Plague of Undeath on the northern nation of Lordaeron by tainting the grain from Andorhal (the primary distributor of grain in the northern provinces) and shipping it to outlying villages and towns. The virulent plague killed thousands throughout the provinces and raised them as mindless undead in the service of the Lich King, and caused the land to become tainted, the plant and animal life becoming diseased. A small resistance, led by Prince Arthas Menethil and Uther the Lightbringer of the Knights of the Silver Hand, were able to destroy the infected granaries and temporarily halt the spread of the plague. Not long after the time of Arthas' eventual fall, beginning with the Culling of Stratholme and coming to its climax with the murder of King Terenas, the majority of the population had been converted into the undead, had fled or were regrouping trying to fight the living dead in any way they could.

The name Eastweald was still used during the days of the fall of Lordaeron[4] but as time passed the name was replaced by the Plaguelands.

The Blackened Woods of Quel'Thalas, having already suffered from the effects of dragons' fire during the Second War over a decade earlier, also became tainted by the plague after the fall of Lordaeron, during the Scourge's march to the Sunwell. Seeking to give the Scourge as pyrrhic a victory as possible, the elves put their forests to the torch. Today the region is known as the Ghostlands, and is home to the major Scourge holding in Quel'Thalas, the fortress of Deatholme.

Following the Scourge's defection from the Burning Legion after the Third War and the later splintering of the Forsaken, the Plaguelands became divided between the minions of the Lich King and the new followers of Sylvanas Windrunner. To this day, the Scourge continues to corrupt the Plaguelands, spreading the Plague of Undeath from strategically-placed cauldrons that taint not only the land, but the air and the wildlife as well. Although the Scourge presence is decreasing thanks to the efforts of different factions based on these regions.

There are many others besides the Forsaken and the forces of the Alliance who battle the Scourge in the Plaguelands. The Scarlet Crusade, an organization of maddened zealots who attack anyone who opposes them as fervently as they destroy the undead, took control of some of the few surviving towns in the region, such as Hearthglen and Tyr's Hand but lose them in the following years with the Scarlet Monastery being their last bastion. The Argent Dawn, formed by former members of the Scarlet Crusade who opposed its corruption, fought the Scourge for some time striking against key leaders and locations throughout the Plaguelands until they joined with the remaining Knights of the Silver Hand around the area and formed the Argent Crusade.

The proper Plaguelands are the Western and Eastern Plaguelands, including the Scarlet Enclave. 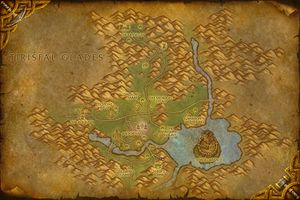 Map of the Western Plaguelands.

Map of the Eastern Plaguelands. 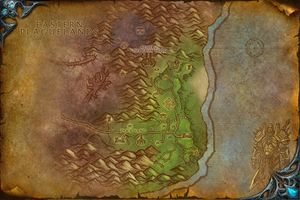 Map of the Plaguelands: The Scarlet Enclave.

Other regions of the Plaguelands

Plagued regions outside the Plaguelands