For planes in the main canon, see plane. 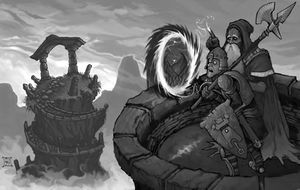 Some adventurers go beyond Azeroth to other planes of existence. It is there that they encounter eternals and demons, adventurers and villains, strange and vastly powerful creatures, and conflicts that span worlds — if not the universe itself.[2]

The human magocracy made great advances in their studies of planar travel after the orc invasion, and copies of the archmage Khadgar’s Contemplations on Many Worlds are found in several libraries in the eastern lands.

Among the elves, it is commonly believed that mortal planes such as Azeroth and Outland are the crudest reflections of planes of greater power such as the Twisting Nether and the Emerald Dream.

There are scholars who study the concept of planes and wonder if there are more to discover.[1]

Though the titans and eternals have known about the planes for longer than the recorded history of the world, the first time mortal creatures on Azeroth suspected there was something other than the world around them was when the Kaldorei made their way out of the jungles to the shores of the Well of Eternity and stared deep into its waters. There they sensed a great power, and in a course of events that would change the world forever, dedicated themselves to its study. They hoped that they would discover the moon goddess Elune within its waters, but instead they plumbed the darkness and felt the cold touch of the Burning Legion waiting on another plane, the Twisting Nether.[1]

The Material Plane refers to the mortal, material worlds such as Azeroth, and, in the past, Draenor. All material worlds are made from the same planar material as the known material worlds, though some of them might possess different basic planar traits (from basic physical traits to magic traits).[3]

Each of these worlds, though they share most of the same planar traits, is separated from the rest in its particular material pocket. As such, each world is treated as its own separate plane — spells such as "teleport" that allow for transport within the Material Plane do not allow for transport between isolated material pockets. Another plane, the Twisting Nether, must be traversed to journey from one to another.

The eternals and even the goddess Elune share residence on the Material Plane of Azeroth with mortal beings.[4]

A philosophical placeholder as an answer was agreed that beyond the boundaries of the Twisting Nether, there is the Great Dark Beyond. The Beyond is all that is unknowable about the cosmos. Were part of it to be journeyed to or defined, it would become its own plane.[4]

The Elemental Plane is a prison within the Twisting Nether fashioned by the titans as a separate plane to hold their old foes. The plane the titans created is spherical and comparatively small — about the size of a single world. It is a three-tiered realm. The domain of Air sits atop the middle layer, which supports both the Water and Earth domains. Beneath these lies a third layer of Fire and molten rock.[6]

The Emerald Dream is a kind of echo of what Azeroth would be like if intelligent beings had not altered its surface.[7]

The Twisting Nether is a place where chunks of worlds float among prismatic clouds, and colorful energy ribbons twist through the void. All is spectral and shadowy — blurring together in a muted, multicolored haze that brushes and teases the senses. Physical laws do not exist in this realm of ghosts, save those that a traveler creates for herself. Magic and illusion dance across the ever-changing vastness. Coterminous with all other worlds, the Twisting Nether can be a gateway for those who know how to use it.[8]

Malygos studies the various planes of the multiverse both remotely and in person.[11] It is said that Al'Akir is aware of all air spells that are cast anywhere throughout the multiverse, although if this is true, he rarely becomes personally involved in their resolution unless they affect him directly.[12]

According to the books, there are no Dungeons & Dragons style planes within the Warcraft universe. The Warcraft universe is both simple and vast. Unlike the standard D&D world, Azeroth has no distinct Astral, Ethereal, Inner, Outer, Positive, or Negative Planes — just a measureless nothing known as the Great Dark Beyond. An infinite number of worlds spin within the multiverse and it's impossible to say whether they are scattered across the universe or superimposed upon each other.[13] However, although those planes don't exist, they have a counterpart or are somehow related to the Warcraft universe.[3][4]

The Astral Plane does not exist in Warcraft universe,[14] it is replaced by the Twisting Nether.[4] Outland exists in this plane.[3]

There is no Ethereal Plan in the Warcraft universe.[15] No exact equivalent of the Ethereal Plane exists in the Warcraft universe. Only the Emerald Dream can be clearly mapped to another plane, that of the physical world of Azeroth, yet they remain distinct places in the cosmos and grow more disparate with each change made in the mortal realm. Ethereal Spells result in the target becoming invisible and intangible to all creatures and effects on the Material Plane.[3]

As such, any creature described as existing or otherwise interacting with the Ethereal Plane is treated as simply being incorporeal on the Material Plane, but are considered invisible.[16][17]

Only the titans remain as creatures who may originate from a place beyond the known planes, and the dwarves have yet to discover the answer to their mystery.[4]

The final destination of the spirits of the deceased remains a mystery to the priests and philosophers of Azeroth. However, as spells such as resurrection can reunite a dead body with its spirit, and a majority of living creatures from the tauren to the troll shadow hunters claim they can communicate with and call upon the power of the spirits, a widely held belief is that the spirits of the dead remain on the Material Plane — in an immaterial state that can only be altered or contacted through the use of magic.[4]

These planes don't appear to exist. But their forces are known to flow through Azeroth and the Twisting Nether.[18] These forces are not limited to any single plane; they are instead an integral part of every aspect of the Warcraft universe, woven into every plane. Thus, spells that call upon these energies such as harm, heal and shadow conjuration instead draw upon local sources rather than reaching to another plane.[4]

Magical weapons that have effects wielding these energies draw upon that positive or negative energy bound into their own material, freed by enchantment.[4]