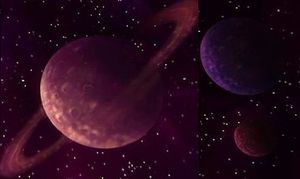 The Great Dark Beyond. 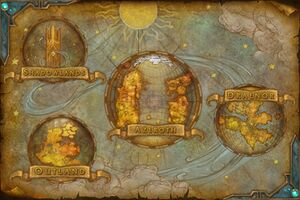 The "cosmic map" from World of Warcraft.

The term planet (sometimes referred to as world) is a geographical category. Planets exist in the Great Dark Beyond as well as in the Twisting Nether. Worlds contain continents. 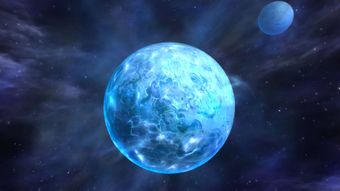 "See for yourself the cruel, frozen void that lies beyond the margin of Azeroth's skies!" — Star Augur Etraeus 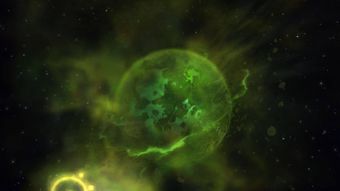 "The Burning Legion. Slayers of whole worlds. Could we hope to resist? Can you?!" — Star Augur Etraeus 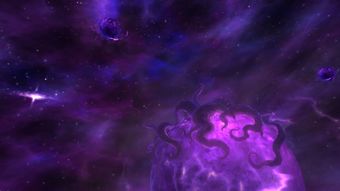 "These are the beings who will devour the future you so futilely fight to protect!" — Star Augur Etraeus 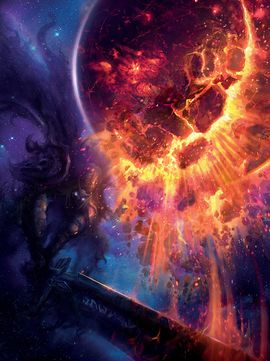 The titan Sargeras destroying the planet with the corrupted world-soul.

Titans are awakened world-souls and thus each titan is a planet themselves.[22] Except for Azeroth and Argus, the details of what each titan's planet was like are unknown.

The Elemental Plane is a plane the titans created and is spherical and comparatively small — about the size of a single world. It is a three-tiered realm. The domain of Air sits atop the middle layer, which supports both the Water and Earth domains. Beneath these lies a third layer of Fire and molten rock.[25]

Ethereal merchant Gezhe while speaking to a Consortium Nether Runner mentions Hara'samid sector and Xarodi sector as well as Heraazi exports and Sodaraami backers. Any of these could potentially be planets.