A player character (PC) in World of Warcraft (WoW) is an in-game Alliance or Horde character controlled by you or another person (also known as a player). 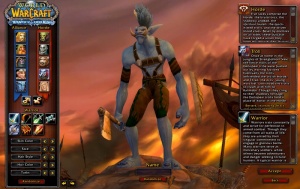 The interface of creating a player character.

When you first start playing the game, you create a character for yourself, and you play the game as that character.

Also referred to as just a player or a character.

Some other names used:

Fighting another player character is called Player versus Player (PvP).