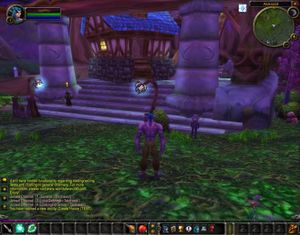 Player housing (aka guild housing), are theoretical features that would give players a place to store items and have a place to call home. Introducing housing into the game could have many primary and secondary effects.

As of April 2019, the developers are still thinking about how to implement this feature without it feeling too clumsy.[1][2]

While there are models and spells in the game files related to player housing, these are more likely from the alpha version of World of Warcraft but never made it live.

During the Gamescom 2010, Tom Chilton declared that "housing will be introduced to World of Warcraft some time right after "never"."[3]

Throughout the years, the players have discussed and debated how the features of Player Housing (PH) or Guild Housing (GH) could be implemented within WoW. Most are in agreement that the Housing feature will inevitably make it into the game.

Reasons to add housing for players

Reasons to not add player housing

Reason to not add guild housing

The advent of Player and/or guild housing in WoW, provides the developers an opportunity to add new professions and augment the current professions with more recipes. The mechanism for acquiring housing could be a mass resource turn in. Implementing housing in this way will promote the crafting economy as the resource gathering will have to be repeated for new and rerolled characters or if you want to change your house-style. Every profession could possibly be augmented.

Will this ever come? I googled alot, but i cant find a post of a Blizzard official denying this could be coming. (2011-7-25)
Takralus: "I'm afraid there's no update since the last time we spoke about it. We know it's a feature that some players would be interested in, but consider the fact that players are sad to see the world outside the city is quieter since the introduction of things like the LFD tool and flying mounts etc. I'm speculating here, but player housing may take yet more people out of the world, and even cities.
Plus there's also the continuous weighing-up we have to do when it comes to development time. I imagine it would be a huge task, taking the devs away from creating new encounters and other features."

Are we going to see guild houses someday so we could finally get a special gather place for the guild, to meet and interact easily? (2011-4-27)
Draztal: "Guild housing is something we have discussed many times. It would be neat to have a place for people to hang out, but every time it has come up as a possibility we don't think that is worth the amount of time and resources it would take to implement (and do it right). This is one of those features where if we ever decided to do it, the benefit would have to outweigh other content we could be working on. Also, we don't feel that we need any new ways for players to hide themselves away. If possible we at least like people to be hanging around in the cities, if not out in the world. We know that many guilds, despite lack of official guild housing, have designated meeting locations throughout the world, which we think is really cool. If you don't have one yet it might be something to explore."

Is there a feature in another MMO that you admire and would like to see in WoW? (2008-9-01)
Tom Chilton: "Sure! Right now, for example, we don't have a housing system. Other MMOs have it and it's a system that we've talked about since before the launch of the original WoW. We've talked about housing and how we'd do it and how it might work for at least five years."
Is it something you're actively working on?
Tom Chilton: "No, we're not working on right now, but it's incredibly complex to do right and we're not sure yet if it's going to be the right thing for WoW in the long run. It has major implications for the game itself and again I wouldn't go out of my way and say never but it's not on the immediately of things to do."

(2008-9-01)
Drysc: "Heh, well skimming through it seems not everyone wants player housing at the moment. Not that we use the forums as a barometer for popular opinion, but anyway...Player housing is still something that intrigues us. If the place and time are right, and we can add player housing and make it a meaningful addition to the game, make it cool, we'll do so."

(2007-10-04)
Nethaera: "These were not promised at any particular time . I don't believe we even used the word "promise" in any statements about these. We have said in the past , however, that these are things we would like to see added to the game. I can't give you an ETA since we don't have one as of yet.
We'd like them added in, sure, but beyond that we couldn't tell you more. When we get close to a point where we actually are implementing these things, we'll do what we can to give you all a heads-up."

(2006-10-02)
Nethaera: "The word is that we like the idea of player housing and would like to implement it at some point in the future, however we don't have any particular ETA of when we will. There is a laundry list of things we still would like to add to World of Warcraft and this is just one of them."

(2006-1-7)
Tigole: "You've posted some really cool ideas on Guild Halls.
Player and guild housing is something we've always been interested in pursuing. While we won't be including those features in the Burning Crusade, that doesn't mean we've abandoned our hope to include housing in the game sometime in the future."

2004-12-14
Caydiem: "Housing is a huge feature with a lot of dedicated time needed. While we definitely want to do housing, and it is something 'on the list', it's not a 'soon after release' feature. It's more of an 'on the horizon' feature. :)"