From seed to flower, a tiny terror is grown.[1]

The podlings are a race of small, wide-eyed and extremely vicious plant-creatures native to Draenor. They are members of the Primal faction. 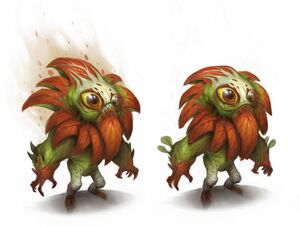 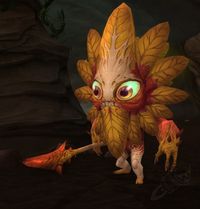 In the aftermath of Botaan's destruction, spores from the Sporemound's corpse settled in the wilds, giving sentience to existing forms of plants. The jungles stirred as new beings took shape and walked the land, among which were the small and simpleminded podlings and sporelings.[2]

A number of Draenor's indigenous species blur the line between plant and animal, and the so-called podlings are the most vicious and chaotic of their ilk. Small and seemingly harmless, they work together to capture their prey, attacking only when they have numerical superiority. Explorers who pay attention to the color of podlings' flowering buds can ascertain whether they favor poison, ensnaring, or physical attacks to incapacitate their victims. Once podlings have overwhelmed their quarry, they will drag the unlucky creature down into the weeds to fertilize a new generation. The clear lesson for adventurers: looks can be deceiving![3]

Podlings appear in a wide range of bright and eye-catching colours. Lively creatures with an aggressive demeanour, podlings often use simple spear-like weapons — crudely adorned with thorns and twigs[4] — to attack enemies. Usually found in groups, these tiny warriors do not seem afraid of taking on prey several times larger than themselves. Podlings are capable of overwhelming and devouring humans and other larger humanoids.[5] Podlings also lay traps for prey such as squirrels, rooting them in place until the podlings return.[6]

Podlings are able to communicate with the other races, including those from Azeroth, but speak in slightly broken language.[5][7] Some podlings such as Phlox have been known to speak exclusively in rhyme.[5]

Some say the podlings of Gloomshade Grove bow to the mad king of the east, Mad "King" Sporeon.[8]

[Star Root Tuber] that grows there.

While fungi are not actually a type of plant (despite common misconception), the podlings of Shadowmoon Valley can be seen dancing around an image of a sporeling, projected by Leaf-Reader Kurri, hinting at some sort of connection. Kurri exclaims, Mushroom show future. Believe! hinting that podlings may have become sporelings, likely due to being infected by the Zangar encroachment (seemingly despite their apparent allergy to spores). This seems to be supported by Blizzard's statement that the sporelings were not always mushroom creatures.[13]