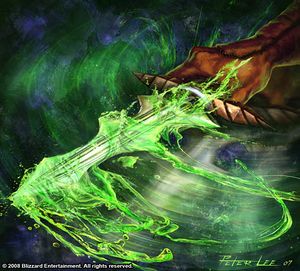 A blade drenched in poison.

Poisons are abilities that enable Assassination rogues to coat their weapons with poisons. When a poisoned weapon strikes an enemy it has a chance of applying a debuff that damages, slows, or otherwise hinders the enemy, depending on the poison applied. First available at level 2, poisons are a core part of the Assassination rogue and their use is required to maximize effectiveness in most situations.

Poisons are considered a temporary (1-hour) weapon enhancement. Poisons do not stack with other temporary weapon effects such as a Blacksmith's sharpening stones or weightstones or Alchemist's oils. Only one such temporary weapon enchantment can be active on a weapon at a time.[citation needed]

Some rogue abilities and specializations increase the effectiveness of poisons.

Poisons are learned automatically by the rogue as they level. A rogue can only have one Non-Lethal and one Lethal type of poison at the same time. 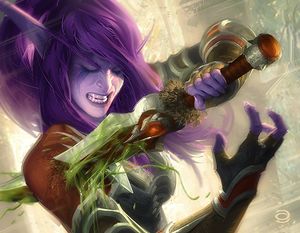 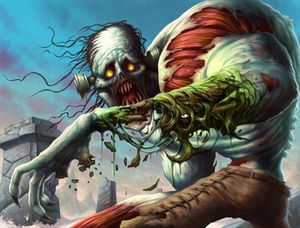 Faster weapons do not always increase the rate at which you apply a poison: unlike the other poisons (which have a fixed chance per hit),

[Wound Poison] use PPM (proc-per-minute) mechanics. This means that even on a very slow weapon your Wound Poisons will add the same amount of DPS (damage per second) as on a fast weapon.

The argument for using slower weapons is this: based on your weapon speed and your poison's PPM, an average proc chance is calculated that will be used every melee swing. However, your special attacks (Sinister Strikes, Mutilates, etc.) can also deliver your poisons, and they use this very same calculated proc chance. So equipping a slow weapon results in an increased chance of applying poison with your special attacks, which, of course, are not restricted by your weapon speed. The difference in damage is rather minimal though, so people often just follow the "slow MH, fast OH" because they could always put Crippling/Deadly/Mind-Numbing on their OH without much-reduced effect.

Prior to patch 3.0.2, Rogues made their own poisons using a Poisons skill. Poison ingredients were purchased at Shady Dealers or reagent vendors, found in junkboxes obtained through Pickpocketing, or gathered with Herbalism. Once you had the Poisons skill, you had to level it like a profession. You had a skill level that you could increase by making poisons that still gave skill. Unlike professions, you did not need to purchase the ability to skill up beyond the 75, 150, 225, and 300 limits. Instead, your current skill limit was simply five times your current level. There was no poisons trainer; instead you learned new poisons from the Rogue trainer, subject to meeting the level and skill prerequisites. Poisons did not count towards your two-profession limit, despite its similarities to other professions. As of the time of their removal, there were seven ingredients and six poison recipes: Crippling, Mind-Numbing, Instant, Deadly, Wound, and Anesthetic. Most of these types would continue to exist in some form in later expansions but sold ready to use directly from the vendor.

[Shiv], making this poison obsolete. It is no longer sold by common vendors, although you can still buy a non-functional version from Jeeves (likely a bug).

After patch 5.0.4 the items were completely removed from poison vendors and made into an ability.

Formerly, the quest chains detailed below were required for all rogues to access Poisons—this is no longer the case and the ability becomes available for purchase upon reaching level 10. The quests remain, however, as Rogue-only quests.

Go to the Old Town in Stormwind. Master Mathias Shaw at SI:7 headquarters offers the first quest in the chain,

[20] Mathias and the Defias. The quest takes you to a tower on the southern border of Westfall near Stranglethorn Vale, along the river, and requires a skill level of 70 in Lockpicking to complete. After completing

[24] Klaven's Tower, the second quest in the chain, you will gain the ability to buy poisons.

Go to the Cleft of Shadow in Orgrimmar and complete

[20] The Shattered Salute. The Horde quest chain is difficult to solo at level 20, but two level-20 characters or a solo Rogue around level 23 should be able to complete it. The two main quests (including

[21] Mission: Possible But Not Probable which requires a skill level of 70 in Lockpicking to complete) in the chain take you to a tower in the northeast corner of the Barrens. When the quest objectives are completed, the Rogue will be poisoned with a very slow-acting poison debuff. After turning in the quest at the Cleft of Shadow, the Rogue travels to Tarren Mill in the Hillsbrad Foothills, where s/he will be cured of the poison debuff (though the poison is easily curable through a variety of other means as well) and gain the right to buy poisons.

Rogues now learn Poisons at level 10 (down from level 20), Rogues can now poison their Ranged weapon, Anesthetic Poison has been removed (