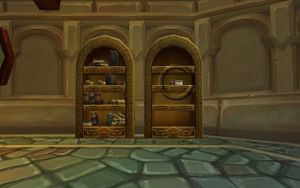 Polymorphic Rules & Regulations is a book found in Legerdemain Lounge in Dalaran[46.8, 40.0]

in place of the book The Schools of Arcane Magic - Transmutation.

Species altercation has the highest potential for abuse and disaster, and is the source of the most number of complaints to the Kirin Tor. Polymorphic study has been under constant scrutiny and threat of removal for years, but only recently have these tribulations increased exponentially. In order for this spell to continue to be sanctioned certain guidelines must be put in place to throttle the increasing number of tragedies reckless polymorphs have caused.

Rule# 1: Do not turn a creature of lesser intelligence into a creature of higher intelligence - Cerebral brain function rarely translates in a polymorph... But sometimes it does. Voracious creatures such as serpents and wolves need not have their predatory instincts honed with a human mind. We feel obligated to quote Small Claims Disaster Case 12651-B, Labeled, "Bartholomew: The Bear who Bears Arms."

Rule# 2: Use simplified creatures for polymorphs - Many rogue mage disciples sanction exotic creature polymorphic studies. But in a desperate effort to lower Kirin Tor insurance claims we are ceasing to support these types of creatures. Sheep are acceptable creatures for any situation. But there are several other common creature types that are supported (Read the latest edition of the Kirin Tor Monthly for an up-to-date list). Polymorphing into creatures like oozes, ethereals, silithid, and worst of all dragonkin is severely punishable which brings us to...

Rule# 3: Polymorphic debaucheries are to be disposed of in a timely and DISCREET manner - The Public need not bear witness to the horrendous abominations wrought from a botched polymorph. Accidents happen, and the Kirin'Tor understands this. However public viewing of creatures like the Were-Whale, Mur-Elf, Amphibious Worgen, Flying Ooze, Grypho-Hippo-Wyvern, Qiraji Bunny, and the infamous "Blue-Checkered Cube" give us all a bad reputation.

Rule #5: Do not polymorph anything that is halfway through a portal - This has yet to not cause an explosion. This is also covered in "Thinking with Portals: A Memorandum on Proper Portal Usage."

Rule #6: Do not polymorph inanimate objects! - We can't believe the Kirin'Tor is receiving reports of this, but such a heinous act caused the development of the brand new Highly Severe Claims Disaster Case 1-A, "My Kingdom For A Horse: The One Hundred and Fifty Reasons Why A Kingdom Should Not Be Turned Into A Horse."

<This goes on for hundreds of pages> 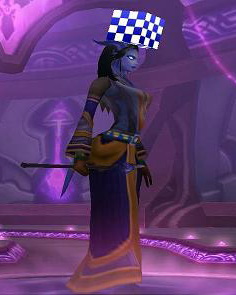 The line 'the infamous "Blue-Checkered Cube"' is most likely a reference to a glitch where you (or a part of your armor, usually the helmet) is replaced by a large white and blue checkered cube due to a missing model.