Not to be confused with Pool of Visions. 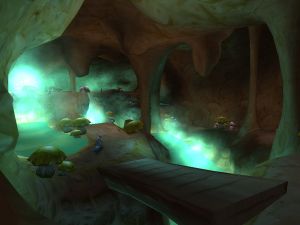 The Pools of Vision

The Pools of Vision are located within a tunnel system just below the cap of Spirit Rise, and serve as the Forsaken base of operations at Thunder Bluff.

Forsaken adventuring on Kalimdor will find a center for both mages and priests in the Pools of Vision. An emissary for the Forsaken Defilers also seeks recruits for battle.

Mages teleporting to Thunder Bluff appear here, as does any character taking the portals in Dalaran or Shattrath.

You can fish the waters here; the catches are the same for all the major cities except for Dalaran.

Some time later the pools were used by Stasia Fallshadow to reveal the location of Med'an.[1]

Following the Argus Campaign, Warchief Sylvanas wanted to visit the Pools of Vision and ask the Forsaken living there if they and the pools could be of any assistance to the tauren in their effort to heal Azeroth.[2]

It is said that the misty, luminous pools reveal visions to those who can channel their energies and that the pools deliver messages from the dead. Here the Forsaken collect and study items of arcane power. The Forsaken can be seen practicing their trademark talent of alchemy as well.[3] The tauren are not thrilled with the presence of the Forsaken at Thunder Bluff. They only grudgingly tolerate them due to their alliance. The tauren place a strong emphasis on the value of life, and the unlife of the Forsaken stands as an affront to their beliefs.[4]

All of the Forsaken in Thunder Bluff are stationed in this dark, secluded area. Though members of the Horde, their exclusion from the rises may indicate the overall tauren distrust of the undead. The only members of the Forsaken that see the light of day are Defilers Emissaries during an Arathi Basin holiday weekend.