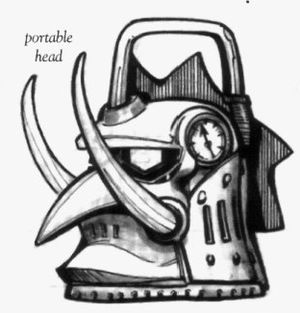 Portable heads are compact repositories of knowledge. Though they could likely take on any outward appearance, tinkers with capricious sense of humor usually build them in the form of the heads of various creatures (and often in the form of their own heads).

All portable heads know at least one language, in order to understand spoken commands. The most common portable heads are those with a second language installed in order to act as translators. After being activated, the translator listens to what is being said and then speaks. Listening to languages it does not understand confuses the head; it will return no results and light its gemstone eyes in confusion.

More complex portable heads possess a body of knowledge on a particular subject. When activated, the head can be asked a question. If it doesn't know the answer, its eyes will light. When it does possess knowledge, it will speak the answer via a small, vibrating membrane hidden in its "mouth."

Spoken languages are translated automatically when a portable head is active, but multiple nearby speakers easily confuse it.

A portable head can operate for 6 hours before its internal boiler requires a fresh dose of liquid phlogiston.[1].