[Cloak of the Deadliest Game], or

Broodmother Slivina's likely to be a snarling ball of teeth, spikes, and talons. You've gone and stolen her children away and no mother takes kindly to that.

'Tis true they hatched from eggs, but she loves the little beasts no less than your mother loves you.

She'll be desperate and fierce in equal measures, everything Hemet loves in a target. You and he, along with that mammoth, should be a match for her.

She's on her perch at the northern edge of the Savage Thicket and hungers for revenge.

You will also receive 13

[The Snows of Northrend].

Well, you're alive. How did you fare?

Well, I had a whole speech prepared, but the old man himself has some words he wants to say to you.

Hemet Nesingwary himself along with his now-pet mammoth Stampy will accompany you on the hunt. Start by marking the Broodmother as it will aggro her. Hemet will start putting out traps for you to lure the Broodmother into and cause heavy damage. The mammoth will be hard to handle, but it's easy when you have the hang of it. 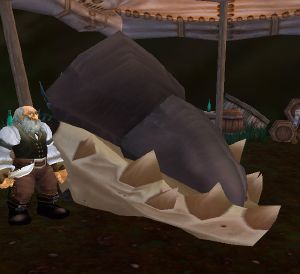 The trophy of the hunt.

After you turn in the quest, Hemet Nesingwary will tell Dorian about the hunt.