Malown was the Postmaster for Stratholme, and when the Scourge attacked was unable to escape their masses. He now haunts the city making sure that nobody tampers with the mail, and he has sworn that not even hail, sleet, or snow shall stop him.

Malown is the sole source of the Postmaster set.

He appears, still active, in the Stratholme pet dungeon.

In order to spawn the Postmaster, you must tamper with the Stratholme mail system. To do this, you'll need keys (In patch 4.1 these were removed and no longer needed) to the mailboxes, which are held by the Stratholme Courier, who is lounging outside Fras Siabi's shop near the main instance entrance. Head into the instance and make your first two lefts, and you'll see him behind the pack of undead. The courier himself is an easy kill (he is initially neutral, so you can clear the mobs around him and take him out solo), and drops 3 keys which open specific mailboxes scattered around the areas near the city gates. Beware of Skul, who can spawn with the undead in front of the courier and make that pull more difficult.

Open the mailboxes with the keys: each time you open one, 3 elite Undead Postman mobs will attack. They frequently cast some nasty curses, including one that does 500 damage after 60 seconds (and stacks multiple times), and one that reduces all attributes by a fixed percent. In general, it is better not to immediately remove all curses from party members and just heal through the damage, because they will be reapplied almost instantly. Instead, concentrate on DPS and keep everyone's life at a high level, and decurse near the end or after the fight. Otherwise, your mage or druid will waste all his or her time and mana decursing rather than healing or DPSing.

There are 6 mailboxes, but you only get three keys, so it's possible to get lucky and have keys to easily accessible mailboxes, or unlucky and get keys to the more remote mailboxes. When you open the third mailbox you have a key for, Malown spawns with his 3 cronies, making it a 4-elite ambush. This can be devastating to an unprepared party, as Malown hits like a truck and the curses from his buddies can quickly stack up.

Please add any available information to this section.
To summon Malown in the pet battle instance, you need to find a Discarded Letter which can spawn behind the lampost at [57, 51] 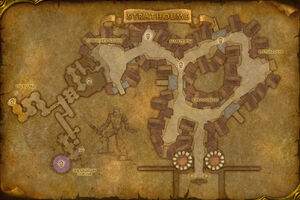 . After Malown spawns, he despawns after 20 minutes.

Despawn
All too easy, try again next week, if you dare.

Malown in Culling of Stratholme.

In Wrath of the Lich King Malown can be found in the Road to Stratholme, alive and sleeping on the second floor of an inn. The same inn two other Stratholme mini-bosses can be found in: Hearthsinger Forresten and Fras Siabi.