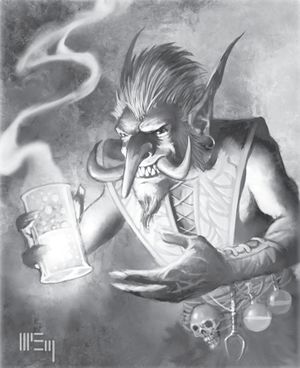 The potion doc takes brewing and alchemy to a different level, operating in a different way than a basic alchemist or witch doctor. They combine science and magic in their unique art. They know how to overcome the restrictions inherit in potion-making, and can create potions - bubbling, unstable concoctions that fizzle and spit vapors - that contain powerful magic. Perhaps they are best known for brewing potion bombs - toss one of these beakers and watch the explosions. They can put together potions with little effort or cost on their own part, and can even do so on the fly, with just a few seconds of preparation.

The potion doc is a valuable member of any adventuring party, as she continues to develop her unusual magic potential, as she concentrates on her potions. She cannot cast spells like she once could, as her focus is entirely on her creations, but her brews provide excellent support for her companions. Her strange skills - and the arsenal of concoctions at her disposal - help make up for the versatility she lacks in spellcasting. Hers is a strange world - a world of bubbling beakers, of colored liquids burbling with magic, of hissing tubes and lists of mixtures and combinations that are felt instinctively and subconsciously rather than memorized.

The potion docs place is behind the lines, casting spells, tossing potions, creating them with surpassing quickness, and taking pride when their allies down their drinks. One of the potion doc’s more… obvious talents is the ability to create potion bombs. Whereas normal potions take effect when a character drinks them, a potion bomb takes effect when its container shatters. Whenever one of the potion doc’s potions breaks open, the spell effect occurs at that location. Usually, the potion doc (or another character) throws such a potion. In melee combat, a character can simply splash an opponent with a potion or crush it against him.

The potion doc knows how to brew a different kind of potion. This potion bubbles and fizzes, leaping as if to escape the container. The idea is for the potion doc (or another character) to remove the stopper, put her thumb over the opening, and shake vigorously. The potion hisses and turns pale and frothy, filling the container and rumbling against its confines. The character then aims the potion at her enemies, removes her thumb, and the potion sprays out in a 15-foot cone. All creatures in the cone are affected as though they had drunk the potion. Only potions that target a creature or creatures can become spray potions. A spray potion is like five potions in one. It uses a larger container than normal, and it requires five times as much effort to create. The potion doc can create spray potions that affect a larger area.

A skilled potion doc can create potions and brews that incorporate a delay before they take effect. Two possible methods exist for these delays: time delays and command delays. A potion crafted with a time delay takes effect a certain amount of time after it is drunk (or thrown, or sprayed, or whatever). When she brews the potion, the potion doc decides how many rounds will pass before the potion takes effect. The delay can be any length of time up to ten minutes. Both magic potions and alchemical concoctions can be created with time delays. A potion with a command delay is inert in the drinker’s system (or lying in a puddle on the floor, or splashed on an enemy’s skin, or whatever) until the potion doc commands it to take effect. Doing so requires the potion doc to mutter some words and wave her hands around it is, in fact, like casting a spell. A potion with a command delay remains potent for an hour, if the potion doc does not command it to activate within that time frame, it becomes a nonmagic puddle of liquid (or part of the drinker’s anatomy, or whatever).

The Highly skilled potion doc’s extensive experimentation and experience with potions mean that she is a walking alchemy lab. Potions and brews course through her system, intermingling with her blood and other vital fluids. The potion doc knows this and further, she knows how to use it to her advantage, for she can create small, innocuous draughts that trigger the latent potions inside her. The potion doc chooses five spells and/or alchemical draughts or philters. These spells and brews are latent within her body. The potion doc has a number of small vials that she can drink (like drinking a potion) to activate her potion blood. Creating these vials takes no effort or time, the potion doc is assumed to always have some on hand if she has her equipment with her. Drinking a vial activates the spell or alchemical brew the potion doc chooses. Only one such latent potion or brew can be active at a time, and at least a minute must pass between their durations. When the potion doc chooses which five spells and/or brews exist in her system, she can choose the same spell or brew more than once in order to activate it more frequently.[1]

Potion docs in the world

Both magic and science have mystic and unfathomable connotations to most people, and the combination of these two disciplines in the potion doc is disconcerting. Her mind operates on a different level than others'. She walks along with her adventuring party muttering to herself (and seemingly unaware of it), absently snatching bits of leaves, dirt and squirming beetles from the environs and adding them to a vast stock of "ingredients" she keeps in innumerable pockets. She produces vials and beakers from clinking packs, tosses something in and squints as it changes color, then either nods in satisfaction or frowns and adds something else, or shakes it, or taps it with a knuckle. Sometimes she discards her creations, tossing them behind her with a crash-and-shatter - with a fiery bang! Of course, not all potion docs match this stereotype. Some are genial and pleasant and talk at length about their art. They keep disciplined and orderly labs. Whatever the case, though, potion docs are unnerving for they possess an odd combination of powers.

Potion docs are uncommon. Few individuals possess both the magical and scientific acumen to take up the path, and most who wish to focus on potions become witch doctor and/or true alchemists. Some few among these go on to become potion docs. Their studies whet their appetites for more, as they see that they can push their potions to do more, to hold ever greater spells, to be capable of things besides just being gulped.

Trolls - particularly jungle trolls - are the most likely to become potion docs, as they have a strong witch doctor tradition. Forsaken apothecaries, with their interest in dark alchemy, and gnomes, with their scientific interests, and goblins, some of Azeroth's premier alchemists, are also likely candidates. Potion docs among other races are rare.[2]