Power Word: Shield (abbreviated PW:S) is a defensive Power Word available at level 8 to Discipline and Shadow priests. It creates a protective shield around a friendly target which absorbs a set amount of damage, and prevents spell pushback.

[Atonement] to their allies.

Power Word: Shield is an instant-cast spell which generates a shield around the target, absorbing most forms of damage. The shield will last for 15 seconds or until "broken" through combat. The shield enjoys the full protection of the player's armor, parry and dodge, partial resists, and other forms of damage mitigation: only damage which would actually injure the player will be absorbed by the shield.

Be aware that Power Word: Shield will not protect a target from debuffs, interrupts or crowd control, nor will it protect against environmental damage (falling, fatigue, drowning, etc). Attacks which additionally apply debuffs (eg.

[Mortal Strike]) will still apply their debuffs even if all damage from the attack is absorbed. PW:S will also not absorb damage from abilities which injure their casters, such as a warlock's

However, Power Word: Shield does protect targets against pushback. It also prevents

[Dazed] effects caused by being struck from behind.

Power Word: Shield does not interfere with rage generation for druids in bear form or warriors. 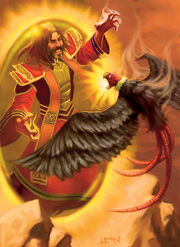