Pozzik is a goblin tinker and a co-owner of the Speedbarge floating on the Shimmering Deep of Thousand Needles. He owns a bomber. 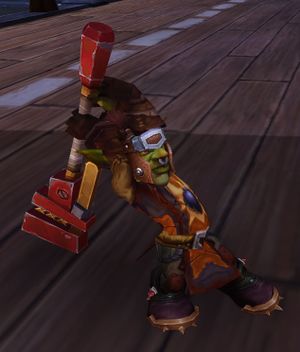 Pozzik hammering on his bomber. 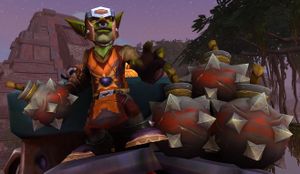 Pozzik on the bomber throwing bombs.

Pozzik is a rocket car enthusiast. Like many currently aboard the barge, he was previously located at the Mirage Raceway which he had built along with Fizzle Brassbolts, his long-standing rival, because they wanted to prove the superiority of their respective race engineering. Both of them then built rocket cars and enlisted teams to drive them.[1] He used to be one of the most respected tinkerers in Undermine before he retired to start working on the racers.[2] Once he joined the new team, he developed the two engine model racers.

Since the Cataclysm, he is affiliated with the Bilgewater Cartel and the Horde.

Pozzik is a member of MEGA, the Mechanical Engineers' Guild of Azeroth.[3]

During the Faction Assault on Nazmir, he directed Horde champions to use Pozzik's Experimental Bomber against the Alliance on the Sundered Span.[4]

Pozzik was among those who attended the private auction for the X-52 Personnel Armor.[5] After Gallywix took Hobart Grapplehammer hostage to get the armor for himself, Pozzik joined the battle against Gallywix.[6] After Hobart was freed and Gallywix beaten, the armor fell into the possession of Gallywix's old rival.[7] 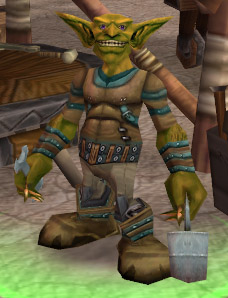 It's all I can do to keep this ship from tearing itself apart and I still have to deal with puffed up baffoons like Fizzle here!