Prelate is a rank that can appear in several different cultures, being either a civilian or religious rank.

Prelate is a rank held by draenei civilian regional administrators in Shadowmoon Valley on Draenor. They work together in a prelate council.[1] Ancestral Prelates used priest-like powers. 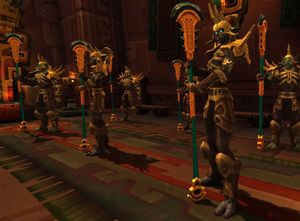 Zandalari prelates are Zandalari paladins. The prelates serve Rezan, and they are the highest order of holy warriors to serve any loa. Their path is the elite, taking only those gifted from birth with prowess in battle and gifted by the loa, and crafting champions of light to defend their empire. The prelates do not have any openings or handouts. After Rezan's death, the prelates are cut off from his power except for a handful of his followers.[2] The prelates in the Battle of Dazar'alor could still use their powers, placing them among that handful.

Even with Rezan gone, his ideals remain. The prelates choose to lead those who are lost and be a beacon of light against the darkness.[3]