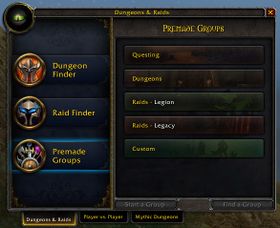 The Premade Groups interface in the Dungeons & Raids tab

Premade Groups is a feature that allows players to form groups for specific purposes, including both PvE and PvP. The feature can be accessed through the Group Finder, found via a button on the micro menu at the bottom of the user interface.

Subregions (such as Oceania within the greater Americas region) are separated within the Premade Groups tool.[1]

The Premade Groups option allows players to create groups for various activities. It can be accessed through either the Dungeons & Raids or the Player vs. Player tab of the Group Finder. Both versions are identical, except that only group types appropriate to the tab are able to be selected.

Opening the Premade Groups pane presents several main options, depending on the tab.

Once a type has been selected, the player can click one of two buttons: Start a Group, and Find a Group. 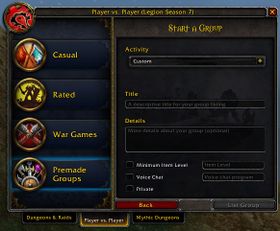 Starting a group in the Player vs. Player tab

To start a group, select one of the main options and click Start a Group. Regardless of which option is selected, the player will be taken to the same screen, where they can set various parameters for their group, including type (Questing, Dungeons, Battlegrounds, etc), title, details, minimum item level, and whether voice chat is required.

Once an option is chosen, the Find a Group button will take the player to a list of groups which match the chosen type. The player can browse through the various groups suggested, or filter them through a text field at the top. If no groups are found, the player is prompted to start one themselves.

If the player finds a group they would like to join, they can click to request invitation. The group leader will receive notification of your request, and may choose to accept or decline it. For raid groups, both the raid leader and players identified as raid assistants share the ability to accept or decline applicants. If they choose to invite you, you will be added to the group.

The player/s forming the group are able to see a list of players invited so far, along with their combat roles, as well as a list of pending requests. Raid group leaders and assistants are also able to see the Proving Grounds medals of applicants.