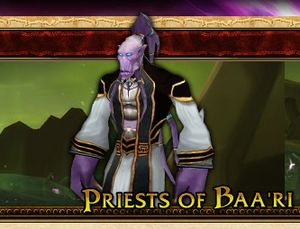 The Priests of Baa'ri were a joke faction announced as coming in the Black Temple. Among their would-be rewards were notably holy resistance items.

Gul'dan's rise to power led to the near-extinction of the draenei and the severance of the orcs from the elemental forces of Draenor. Baa'ri became the site of one of the worst atrocities committed in this dark conflict: the city was covered under a wall of lava and ash as Gul'dan and other warlocks raised the volcano which now bears his name.

While the Ashtongue Deathsworn search the ruins for the relics, the remnants of the Baa'ri priesthood have remained in hiding until the arrival of Alliance and Horde forces in Outland. With new allies to help in the struggle to reclaim the Temple of Karabor from Illidan's clutches, the priests of Baa'ri have reemerged to offer their knowledge of the Light to those who prove themselves capable of opposing the Betrayer.[1]