Primals are those warriors who revel in their bestial rage and give into it completely. As they slowly take on an increasingly beast-like appearance, they also gain powerful and violent abilities.[1] Primals believe that every creature is inhabited by a dark, primeval essence. They hold to the notion that each and every living soul is haunted by a beastly force, and that those who accept this fact can eventually ascend to another level of existence - one that is more primitive, but also more connected to nature and the animal kingdom. Though very few can fathom the existence of this whimsical force, primeval characters strive to unlock its secrets. They call this pristine essence "the beast within". Primals believe that once someone has accepted the beast within himself, he must learn not to suppress it — as most civilized folks were brought up to do. Indeed, the character must welcome it into his heart and soul in order to call upon it in times of need. Thus, primals can tap this essence and channel the instincts, strength, and fury only the beast within can provide. 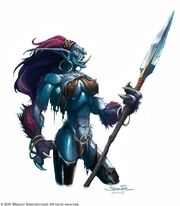 Long ago, even before they forged their great empires, trolls lived in a primitive world. They shunned civilization and failed to comprehend its ways. Among the many tribes of jungle trolls, fierce barbarians emerged. As disorganized as they were, these raging warriors formed the bulk of each tribe's military force - and indeed the proud jewels of the trolls' ancient life. Though all barbarians of olden times learned to embrace and control their rage, a few among them connected more fully with their bestial anger as well as with their animalistic insights, exploring and surrendering to the dark, primeval essences that inhabited them. In battle, barbarians of the time — like their modern brethren — fought as if possessed, but among the jungle troll barbarians some truly were possessed. They not only reveled in their bestial rage, they completely surrendered to the beast within. Their connection to the dark essence into which they tapped was so strong that their bodies took on beastlike appearances. Eventually these warriors came to be known as primals.

Today, people view primals as lethal and unpredictable warriors driven by savage natures and primitive instincts. As his connection to the beast grows, a primal takes on an increasingly beastlike appearance, gaining powerful and deadly new abilities as he unlocks the mysteries of the beast within and learns to control it. Primals indeed revel in the bestial fury they can trigger on a whim, but there is more to them than meets the eye.[2] As the primal begins to connect with the animal spirit within her, she comes to understand the animals around her. A primal may speak with animals for a number of minutes equal to how skilled she is. The primal grows sharp claws and fangs that can be used in combat.[3] A primal can use body language, vocalizations and demeanor to improve the attitude of any creature of the animal, magical beast or vermin types.

Through time subtle changes in the primal’s physical appearance emerge. His physique takes on the most common features of a wild beast. His hair becomes coarser, his face takes on more angular features, and his skin thickens, changes color or grows hairier. As he grows more in touch with the beast within, the primal’s body continues to change. The muscles of his body become thick and sinewy, granting the primal greater Strength. The primal’s eyes mutate into those of a wild animal. The primal’s irises turn into an eerie yellow, green or white shade while his pupils become darker and shaped like those of a feline or other type of animal or magical beast. As the primal gains experience, his body continues to change, becoming more beast-like. Upon attaining more experience, the primal’s nails turn yellow and harden. His teeth become pointier, as though they were gradually turning into fangs. Through extensive experience the primal reaches the apex of this mutation, his body now looks like an unnatural mixture of his original race and a strange type of creature. From this time forth, he appears more beast than humanoid.

Unlike barbarians and berserkers, who harness their rage to become more powerful, a primal channels his fury from the beast within. Unlike most characters, the primal accepts and indeed embraces the wild and often macabre aspects of the beast that inhabits all creatures. More importantly, he learns how to draw from this primeval essence and turn his rage into devastating fits of anger not unlike those of the wildest beasts. Like the beast within him, the primal is constantly on guard, and his instincts become so well honed that he can trigger a rage in response to someone else’s action. While raging, the primal grows fangs, horns or claws. The primal’s fangs, horns or claws remain until his rage ends. A primal considers this new appendage a natural weapon with which he is proficient.[4]

Primals in the world

Civilized society fails to understand primals. Most people — even among the Horde — believe that primals are too bestial, too bloodthirsty and too unpredictable to be trusted. Indeed, the majority of those who have crossed swords with a primal did not live to regret it; those who survived now make it a point not to anger them, and indeed do their best to avoid contact with primals. Primals are not welcomed in cities under Alliance control. Since few people dare confront them, primals are often left alone for several days before soldiers or town folk organize to drive them away.

Among the Horde, primals are at the same time mistrusted for their incomprehensible connection to the beast within and admired for their sharp instincts and feral bestiality. Thus, their peers often view them as undesirable necessities. Though they are an invaluable addition to the Horde military, in most Horde member's minds, primals serve only one purpose: to wage war. In times of peace (which are certainly rare), even the Horde considers them a sometimes dangerous but always menacing nuisance.

Primals consider themselves illuminated and blessed with powers far beyond what others can comprehend. Thus, they frequently view those who would cast them out as frightened and ignorant fools. Preferring the simple ways of primitive people, primals feel more at home among barbarians and shaman - and these characters indeed are more welcoming and understanding toward primals.

Although the tradition of the primal hails from the jungle troll tribes, and almost all those who practice this strange profession are from this race, a few orcs and tauren recently uncovered how to unlock the beast within. Taught by jungle troll primals, orcs and tauren who follow this philosophy are rare, but they have the potential to become just as powerful as their teachers.[2]

The concept of primal and primalists in the game seem to be different of that in the books described above.