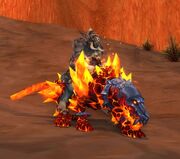 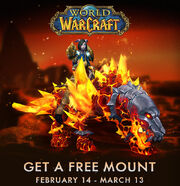 Primal Flamesaber is a reward from the "For Azeroth!" promotion event in Blizzard's free-to-play hero brawler game Heroes of the Storm. The event lasted from 10am PST February 14th to March 14th 2017 (exact start and end dates vary slightly by region) and required players to play 15 matches of Heroes of the Storm using a Warcraft hero while in a group with a Battle.net friend. Besides granting the Primal Flamesaber in World of Warcraft, completing the event quest also rewarded a 10-day Stimpack and a Flames of Judgement Charger mount in Heroes of the Storm.[1][2]

Due to the promotional event ending a few hours earlier than intended, it was re-enabled through March 26, 2017. Quest progress was unaffected.

This item is automatically gifted into the player's Mounts tab and is usable once it has been unwrapped. Alternatively, it can show up in the mailbox.

The primal landscape of Azeroth was once swarming with elemental creatures of all types.

Heroes of the Storm mount