For the alternate universe character, see The Rusty Prince.

Prince Erazmin is the son of King Mechagon and the leader of the Rustbolt Resistance, a faction of Mechagon mechagnomes who oppose Mechagon's plans of mechanizing all organic life. 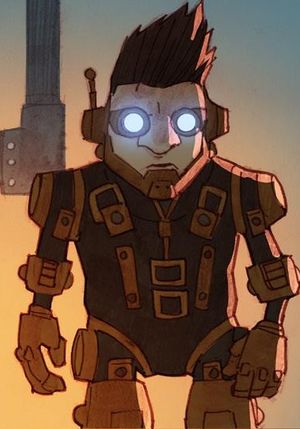 When the elderly gnome explorer Kervo crashlanded on Mechagon Island, he was found by King Mechagon and a group of mechagnomes and brought into Mechagon City. Erazmin watched the event from a distance alongside a friend, who told the prince that they could make use of the outsider.

After being shown around the city and having had King Mechagon's goals explained to him, Kervo was escorted back to his chambers by a mechagnome. Erazmin approached the pair and offered to escort their guest himself. Once out of earshot of the other gnomes, Erazmin told Kervo to leave the city immediately. He explained that the king was using Kervo and his apparent pain and weakness to drum up support among his subjects for a device he planned to use to forcibly revert the Curse of Flesh among all organic life on Azeroth, which Kervo had to warn his people back home about.

However, when Erazmin and his companion went to Kervo's chamber shortly after, they found it to be empty: Kervo had gone to tell the king about his son's treachery, meaning Erazmin and his allies had to flee the city before the king came for them.[2]

After fleeing the city, Erazmin and his allies established themselves in Rustbolt and declared themselves the Rustbolt Resistance. Sometime afterwards Tinkmaster Overspark and Gazlowe respectively led the Alliance and Horde to Mechagon Island.[3][4] Accepting their aid, the Prince's requested for Tinkmaster Overspark and Gazlowe to put aside their differences and fight together, while he led adventurers in a rescue mission in the Junkwatt Depot.[5][6] As he fought with the adventurers, he revealed that his father had secretly mechanized the bodies of those who resisted him, a process that left nothing left of the original gnomes, and warned that if King Mechagon wasn't stopped that everyone would share their fate.[7] Amidst the fighting, Erazmin discovered a broken drill rig and ordered for its restoration, which released Pascal-K1N6 upon its completion.[8]

With the rescue complete, Erazmin declared that King Mechagon wouldn't stop sending his armies at the Resistance as long as he did not fear them. To that end, he ordered for one his father's projectors to be hacked in order to proudly shine the banner of the Rustbolt Resistance that would be big enough for the whole island to see.[9] With this accomplished, Erazmin directed his new allies to return to Rustbolt, where he gave them a tour of the city and formally invited them to the resistance.[10]

Knowing that the Mechoriginator would reverse the Curse of Flesh and obliterate anything not descended from the titan-forged, Prince Erazmin declared that they had to stop his father before it was too late. Following his father's death, Erazmin declared that his father truly died the day he abandoned his body and soul for full mechanization. Remarking on the burden of leadership, Erazmin revealed that he planned to lead his people with wisdom, ingenuity, and humility.[11]

He is also present during the Great Gnomeregan Run.

In one possible future, King Mechagon successfully activates the Mechoriginator. Instead of removing the Curse of Flesh, however, Battle Captain Izira Gearsworn suspected that due to flawed and corrupted research, it simply burns away all flesh on Azeroth, killing the majority of all living things. Only those who were sufficiently mechanized survived. King Mechagon, working with Bondo Bigblock, soon after assaulted Rustbolt in the chaos with Bondo's clockwork giants and mechanical spiders. The mechagnomes fought back until their gears gave out, but many of them are killed. Izira, their strongest fighter, was incapacitated when her legs broke, leaving her unable to prevent Prince Erazmin from being taken prisoner.[12][13] Mechagon proceeded to fully mechanized Prince Erazmin, transforming him into The Rusty Prince and bending him fully beneath his will, who can then be fought as a rare encounter by players.

The kidnapped Resistance fighters are being held in this fortress by my father's amechanized forces.

Do not delay. Every second lost is a mechagnome lost.

Many rumors of my father's plans have leaked to the surface, but data is scarce.

As we await confirmation, prepare yourself and your people.

The Rustbolt Resistance will need you by our side when the time comes.

What improvements could mechanization offer me?

You are already a master of technology, in a way.

You study magic, I study mechanics. They both follow important principles that aren’t so different from each other. I’ve often said that the underlying ideas and ideals of the—

Oh, apologies, you asked me a specific question. Let me answer your question with a very simple idea:

There are more than just ARCANE missiles.

I see that you’re willing to go to any lengths to acquire the power you crave. You must be careful where that urge leads you. I’ve seen it lead to pain and misery in my father.

But, in the realm of self-modification, your unwavering will is a boon. Others resist the benefits of mechanization out of fear or misunderstanding. You will not.

I will not feign to know what powerful upgrades you are already considering. I’m certain you already have some in mind.

Instead, I will caution you against going too far. Do not lose yourself in the machine. Take it slow.

Greater men and women than you have fallen prey to it’s lure.

You’ve earned those calluses on your hands and feet, and I would deprive you of them through full limb replacement.

Stay subtle. What if you embedded steel plates under your palms and retractable katars in your knees?

You’d look the same, but would be at least 19% more dangerous.

I’m surprised to hear that you are open to such ideas. I’ve always said that nature often needs to be pushed along, but I would have wagered that you’d disagree.

That said, I’m unsure how permanent modifications would interface reliably with your malleable biological components. Unless you’re willing to take large risks, I would recommend starting with ingestible modifiers.

If those succeed, move onto small, superficial attachments that can be removed without risk if your body reacts poorly.

This is a truly puzzling postulate.

Our researchers have had tremendous breakthroughs in enhancing the connection between a hunter and their pet via embedded communication and empathy relay modules.

I must warn you, however. There are many unsavory side effects that many hunters choose not to speak of.

Sometimes, even our closest companions are better left outside our heads.

I understand your kind do not require sleep on a biological level.

However, sleep offers secondary benefits to cognitive functions and memory consolidation in others, so I assume it would for you as well.

If you insist on avoiding it, I recommend experimenting with swappable sensory deprivation modules that may assist in short-term mediation and stress-reduction experiences.

Or, if you refuse to consider such activities entirely, at least mod your eyeballs to give you flawless nighttime vision for those nocturnal hours.

You're quiet, certainly. But you are not my-new-feet-are-made-of-material-that-absorbs-all-sound-even-ones-that-my-feet-produce quiet.

Maybe you're less worried about hiding, though? You could also embed extra daggers wherever your hands can reach on your body, for easy access during combat.

Don't poison them before you embed them, though. Takron, you fool...

Every shaman I've ever met has a favorite element... even if they won't admit it.

You require more lightning? Stuff your arms with a variety of metal gadgets to make them perfect, efficient conduits of that electricity!

More interested in lava? Perhaps try internal forges that'll keep you fueled up and ready to unleash molten rock at anything that moves.

Water is easy. Most people are made of the compound. We've created pumps that tap right into that personal reservoir when you need it most!

Thank you for your candid advice.

I was hoping you'd ask. We must all welcome criticism if we hope to move forward.

I'm perfect just the way I am!

That is not accurate.
I will continue to analyze your performance. Return when you are open to new ideas.

Have you heard of the

Of course. I'm the one who designed it, before my exile from Mechagon. Though I was able to keep it out of my father's possession, it is inoperable without a Perfection Enhancing Gearbox to regulate its output.

But even if we had one... I'm afraid the Mecha-Perfection Turbo is far too dangerous for anyone to use. It would take a truly impressive feat of strength to convince me that an individual is sufficiently equipped to handle the risk.