Prince Malchezaar was a prince of the man'ari eredar and a demon of the Burning Legion. He took control of the tower of Karazhan where he can be fought as a raid boss, at the very top of the tower. Access to his room, the Netherspace, is granted after the Chess Event encounter.

Warlocks wearing Deathrattle Regalia had a chance to summon Malchezaar "from the void" in Warlords of Draenor, prior to the deactivation of old tier set bonuses, who then assisted them in battle. Presently, a demonology warlock with the

[Nether Portal] talent has a chance for Malchezaar to appear as one of the additional demons that have a chance of appearing.

It is unknown when Malchezaar arrived at Karazhan or what his goal there was. He apparently arrived while some agents of the Violet Eye were still alive inside the tower, notably Keanna. It was likely shortly before Karazhan was sealed, as the Violet Eye were aware of Keanna's death. He was seemingly a collector of rare weapons such as

Malchezaar is a "memory" in the fight against Argent Confessor Paletress in the Trial of the Champion encounter of the Crusaders' Coliseum.

Following the defeat of the Burning Legion, Malchezaar, and the legions he commands, fell to the summoning behest of warlocks who mastered the art of demonology.[1]

Summon Infernal (All phases)
Malchezaar summons a Netherspite Infernal which, about three seconds after landing, starts continuously casting a

[Hellfire] AoE roughly the size of the one Baron Geddon uses. Each Infernal lives for about 180 secs, and there is no limit for how many of them can be up at the same time. There are typically four Infernals up at a time until the end of Phase Two (see below), after which they will start increasing rapidly. These Infernals are stationary, and must be avoided by the raid. They cannot be targeted or attacked. The cooldown on this ability is 45 seconds during Phases One and Two, and 15 seconds during Phase Three. Malchezaar exclaims one of two emotes to announce an Infernal: "You face not Malchezaar alone, but the legions I command!" or "All realities, all dimensions are open to me!".

Enfeeble (Phases One and Two)
Periodically casts Enfeeble on five characters chosen at random, excluding the current target (the tank). [Note: in parties of 5 or fewer, the Prince does not Enfeeble five characters/everyone. The person at the top of the hate list (presumably the tank) is still not targeted, and all others are Enfeebled.] Enfeeble reduces maximum health to a single hit point for about seven seconds. While this effect is active, any damage causes instant death. Healing effects do nothing, but the lost health returns after this undispellable effect ends. Enfeeble is followed by a Shadow Nova, so enfeebled characters must stay 30+ yards away from Malchezaar, and watch out for Infernals. Vampiric effects such as

[Siphon Life] ignore Enfeeble. This does not hit pets.

[Shadow Nova] has a three-second cast, a range of 24 yards, deals about 3000 shadow damage, and includes a knock-back. This attack can be outranged by healers and ranged damage-dealers, so even if they are enfeebled it does not cause much concern. Enfeebled melee must get out of range; however as long as they start running right away they have plenty of time to avoid the Shadow Nova. This attack can be resisted. During Phases One and Two, Malchezaar casts this roughly four seconds after Enfeeble. During Phase Three, he casts it without preliminaries.

Thrash (Phase Two)
Thrash gains two extra rapid-fire melee attacks against Malchezaar's current target. Malchezaar uses this ability unpredictably, from a few seconds to up to a few dozen seconds between each use.

Parry (Phase Two)
Parry avoids a frontal melee attack as the character ability. This is notable because Parry speeds up the next attack by 40%, and is dangerous in combination with Thrash.

[Sunder Armor] is cast on the main target. As the character ability, this effect reduces the armor of the victim.

Flying Axes (Phase Three)
Malchezaar unleashes his axes on random targets as a separate but untargetable attacking entity. They deal physical damage and appear to have

[Demonic Frenzy] as they start out hitting each new target for only about 400 on cloth, while ramping up to 2000 a hit.

Amplify Damage (Phase Three)
Amplify Damage is a debuff that doubles damage taken from all sources. It is cast on a random target and not dispellable. 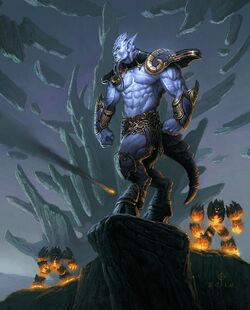 Phase One starts immediately when Malchezaar aggroes. The door to the balcony closes, and Malchezaar starts summoning infernals and casting Enfeeble and Shadow Nova. He casts Shadow Word: Pain on the tank.

Phase Two starts when Prince Malchezaar is reduced to 60% health. He warps in axes, which substantially increases his melee damage. He stops casting Shadow Word: Pain and starts Parrying and Thrashing and casting Sunder Armor on the tank. Infernal summoning, Enfeeble, and Shadow Nova continue as in Phase One.

Thrash is the biggest threat during this phase and can deal more than 12,000 damage inside of a second. Healers should keep the tank as close to full health as possible and stagger movements during group shifts to ensure the tank does not go very long without a heal.

Phase Three begins when Prince Malchezaar reaches 30% health. Melee damage on the tank returns to Phase One levels. He stops using Enfeeble, Thrash, Sunder Armor, and Parry. He continues casting Shadow Nova. He starts casting Shadow Word: Pain and Amplify Damage on random raid members. He throws his axes into the air where they fly around attacking raid members at random. He starts summoning infernals much more frequently.

Malchezaar emotes either "You face not Malchezaar alone, but the legions I command!" or "All realities, all dimensions are open to me!" immediately before summoning an infernal. If you look to the sky beyond the balcony, you'll see a bright yellow meteor headed toward the raid. Its trajectory is a little tricky but somewhat predictable.

One responsible non-melee raider should act as a spotter. He receives a raid marker and has three jobs:

The other ranged raiders stick close to the spotter. It's possible to skip the raid marker and announce safe spots, but using the marker requires a lot less communication.

As for the infernals themselves: before landing, they fly in a straight line toward a point in the arena, but shift direction suddenly at the last second, usually down.

Naturally, your spotter should be smart about choosing a safe spot. A wide open place is better than sandwiched between two infernals' AoE, and the area of the Prince's Shadow Nova is right out.

During Phase Three, Malchezaar summons infernals at an increased rate, so watch those emotes.

Wipes on Prince Malchezaar are typically caused by one of four things:

Note that better gear, especially on the damage-dealers, reduces the possibility of all of these problems.

Aggro
Madness has brought you here to me. I shall be your undoing!

Starting Phase Two
Simple fools! Time is the fire in which you'll burn!

Starting Phase Three
How can you hope to withstand such overwhelming power?

Death
I refuse to concede defeat. I am a prince of the Eredar! I am...

Prince Malchezaar appears as the last boss of The Prologue and The Spire wings in the One Night in Karazhan adventure in Hearthstone. Defeating him in the last wing awards him as a legendary card.