Taldaram in World of Warcraft.

Prince Taldaram, a San'layn, is the second boss found in Ahn'kahet. He has traveled to the nerubian city to siphon power and collect relics for the Scourge.

After Kael'thas's failed assault against the Lich King, some of his greatest blood elf followers were slaughtered and raised into undeath as darkfallen. Prince Taldaram is one of these cunning and bloodthirsty vampiric beings. Always seeking to please the Lich King, he has entered the war-torn depths of Ahn'kahet in search of lost nerubian relics that can empower the Scourge's murderous ranks.

Taldaram, along with fellow blood-princes Keleseth and Valanar, have returned in Icecrown Citadel as members of the Blood Prince Council. The three princes were raised in undeath by the Lich King to avenge themselves upon their slayers and to act as bodyguards for Blood-Queen Lana'thel, the blood-queen of the San'layn.

In order to engage Prince Taldaram, his force shield must be deactivated. Before reaching his platform, there are two smaller platforms, each with four mobs and a crystal orb. To reach the platforms there is a spider-web bridge which can be difficult to spot if it's your first time in the instance. Kill the mobs and click the orbs. Once both have been clicked, the force shield around the platform nearby will disappear. The party should then go to the platform and engage the boss.

Flame Sphere - Now shoots three spheres in an arc covering about a third of the platform. Increased damage.

Vampiric Drain - Similar effect, but now also reduces healing on the affected (stunned) player by 100%. Immunity effects such as

[Ice Block] works though. 'Shield' effects such as a Priest's

Strategy - Have the tank tank him at either extreme side (far or near) of his platform. This way, when he casts Flame Sphere, the entire group can stay together, and run towards the opposite extreme side of his platform. This allows you to only have to dodge two balls, as opposed to three. DPS the boss as quickly as possible when he starts Draining a player. If you bring him from side to side of his platform, then the Flame Spheres are quite easy to overcome, even in heroic.

Alternative Strategy - As the orbs of fire he spawns move away from him in a triangle it is best to tank him with his back to the rest of the party. Exposing the rest of the party as little as possible to the 2 orbs that are spawned. The best location to do this is on the lower platform moving him from right side to left and back, while the healer stays in the middle. 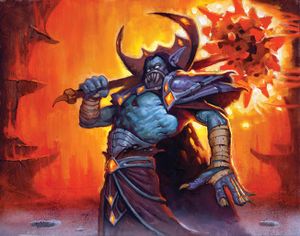 Taldaram in the World of Warcraft Trading Card Game.

Aggro
I will feast on your remains.