Prince Tenris Mirkblood was introduced on October 22, 2008 as a part of the Scourge Invasion world event — which was itself a precursor to the release of World of Warcraft: Wrath of the Lich King. He could be found in Karazhan secluded in The Guardhouse, behind a Bloodstained Door above the stables where Attumen resides, which can be accessed through the stairs after Attumen, or through the ballroom where Moroes resides. His death is required to loot the papers which are the objective of the quest

[70R] Chamber of Secrets. This quest is given by the Argent Emissary in all capital cities and near Light's Hope Chapel in Eastern Plaguelands.

He was supposed to be removed from the game on November 4,[1] but stayed as a temporary boss and had the

[Arcanite Ripper] removed from his loot table. He was removed in patch 3.0.3.

Clear the circular hallway outside his room, then kite him around the entire hallway. Ranged DPS and healers should stand fairly close to the main tank, to avoid Spirit spawns between the tank/melee DPS and the rest of the raid. Try to slow DPS when Blood Mirror is up, and do not attempt, at any time, to use spells that dramatically increase DPS. (

[Bestial Wrath], etc.) You will probably want a healer on the Blood Mirror player and another on the tank. Be aware of the Sanguine Spirits, as they do a lot of damage if you touch them. More spirits come as the fight progresses, so make sure the tank and everyone else keeps moving to stay away from them. 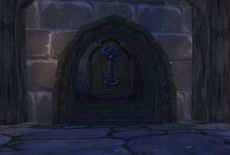 Behind this door, Tenris hides.