Princess Tess Greymane is a member of the Royal Family of Gilneas, as the daughter of King Genn Greymane.[1] Due to her brother's death, Tess is now the heir to the throne of the kingdom of Gilneas.[2] With Liam gone, Tess is searching for answers to questions she never thought she would ask.[3]

Tess' life was saved by a potion made by Krennan Aranas; if not for him, she would have died soon after she was born.[1] When she was a little girl, her father told her that she was to find one beautiful thing every day and that it would make the hard days easier.[4] 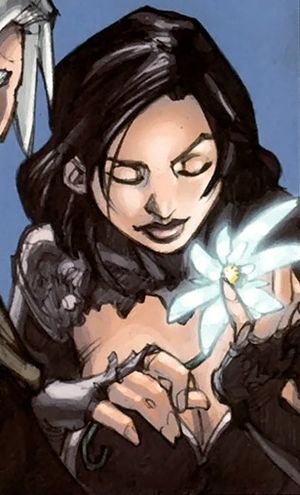 Tess in Curse of the Worgen.

After the Cataclysm destroyed the town of Duskhaven, Tess ventured up to her father's observatory with a single

[Peacebloom] flower. She reminded Genn the words he would tell Tess as a girl. Even among the ruined Gilneas, she was able to find an unharmed peacebloom, and it gave her hope.

During the exodus to Darnassus, Tess and her mother, Mia Greymane, were aboard the Elune's Radiance while her father was on another ship. The fleet was hit by a powerful storm generated by the Cataclysm, and the ship started to sink. Having a leg broken during the storm, Mia could not move and Tess remained with her refusing to leave, so they both risked to drown. Genn, refusing to lose the last two members of his family, assumed the worgen form and joined the rescue efforts of the night elf sailors from his ship. After the storm, both the women reached Teldrassil safely.[5] Tess' whereabouts until Legion were unknown, but it is possible that she followed her father to Stormwind City. 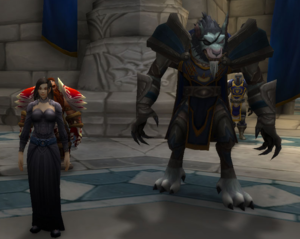 Darius and Tess present for the award ceremony of the player character in Legion.

In the aftermath of the Battle for the Broken Shore, Tess appears on the Skyfire that brings adventurers and other wounded back to Stormwind. If the player chooses to take the optional offered Gryphon ride to Stormwind Keep, she and Lorna Crowley will escort them on their own gryphons, conversing on the way. When flying to Stormwind Keep, Princess Tess Greymane confided to Lorna her concern about the lust for vengeance consuming her father. Lorna states that all Gilneans suffer from that rage, her father more than most. Though Tess concurs with Lorna, she fears more deaths are sure to come. Lorna grimly replies that such is the cost of vengeance and that Gilneas has waited for it long enough. When arriving at Stormwind Keep, Tess tells the adventurer to give King Anduin their condolences for the death of his father Varian Wrynn. The two quickly return to the gunship once the player lands, as they are needed back at the ship.[6] While Tess is dressed in armor for this appearance, it's unknown if she actually had a military role, or if it is due to formal reasons.

Now one of The Uncrowned, Tess is within the sewers of Dalaran in the secret Hall of Shadows. She sends the newest Shadow of the Uncrowned after Garona Halforcen, who has gone to Stormwind to assassinate members of a Burning Legion cult.

She appears, sans her armor, in Stormwind whenever an alliance player reaches the requirements for Prestige rank 2, alongside Lord Darius Crowley, to honor the player for their service to the Alliance.

The Uncrowned receive word of a large cave at the Broken Shore where the Legion is plotting against the Armies of Legionfall, and together Tess and Fleet Admiral Tethys formulate a plan to stop them. With fel-infused gun powder taken from the Blacksail Crew,[7] Tess and the Shadowblade sneak their way into the Lost Temple and blow the cave up.[8] Afterwards, Tess explains that she has not yet pledged service to the Shadowblade because, while all rogues step into the shadows, it had been especially important that her status remains truly secret. But with the Legion's threat too great, Tess wants to have a greater role in taking them down.[9]

After Anduin Wrynn returned from his trip from Ironforge and Netherlight Temple, he had dinner with Genn in Stormwind. During the conversation, Genn urged Anduin to search for a queen to bear him a successor and suggested his own daughter, since Tess was close to Anduin's age. However, Anduin found the idea of an arranged marriage abhorrent and noted that Tess was a strong-willed woman who would likely not be particularly interested in the prospect of an arranged marriage either. Anduin internally reflected that he had heard all kinds of rumors about Tess' actions, suggesting that she had "taken a page or two" from Mathias Shaw, but he was unwilling to bring them up to Greymane, let alone after just having her be suggested as a bride.[10]

When discussing who would head to Darnassus to represent Gilneas, Anduin suggested Tess go and aid their people. Genn agreed, but stated he did not know where she was at the time; instead leading to Mia Greymane being sent instead.[11] 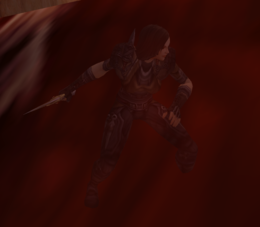 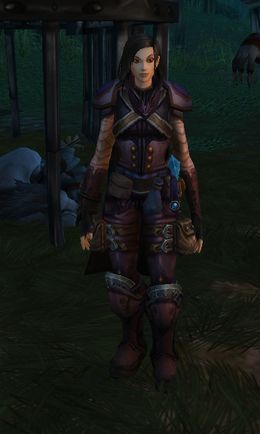 Tess in Duskwood during the worgen heritage armor questline.

Tess Greymane, alongside Lorna Crowley, head to Darkshore on behalf of her father. There, she aids the Kaldorei in reclaiming their land, acting as a co-commander with Lorna as they lead the Gilnean forces in the region. She is surrounded by Gilnean Royal Guards. She states she will not just stand by while the Kaldorei need their help, citing how her mother nearly lost her life; as well as claiming some atrocities cannot go unanswered.

After the battle at the Gates of Orgrimmar, Tess could be found sneaking on the roof a bridge.

Tess wished to become a worgen so she could better know the plight of her people to better rule them when she becomes queen. As her father and mother were against it, they asked the night elf druid Vassandra Stormclaw to help Tess understand the worgen's plight without becoming a worgen herself. Vassandra called on Goldrinn at the Twilight Glade in Duskwood, and Goldrinn put Tess into a dream scenario within the Emerald Dream. In her dream, Tess was a worgen at the time of the Forsaken Invasion of Gilneas, but was unable to save her brother from his death and she fell into the rage of the curse. With Goldrinn's help, Tess realized that she did not need to be a worgen to understand her people, for it was being Gilnean in spite of the curse that defined them. She promoted the adventurer who aided her in this journey to a member of the Greyguard in thanks and as recognition to their contribution to Gilneas.[12]

However, the threat is too great. We are so close to taking the Legion down... and I want to take a greater role in it.[13]