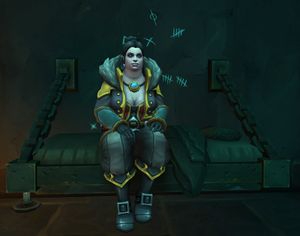 In her cell in Tol Dagor. 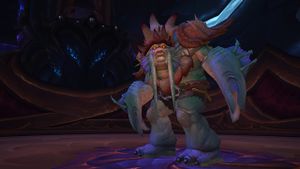 Lady Ashvane after being transformed by Queen Azshara in the Eternal Palace.

Lady Priscilla Ashvane is the head of House Ashvane and the Ashvane Trading Company, and an old friend of Lord Admiral Katherine Proudmoore. She is one of the main antagonists on Kul Tiras during World of Warcraft: Battle for Azeroth.

Priscilla lost her husband at Theramore at the same time as Daelin Proudmoore's death.[2] She hated Jaina Proudmoore for her role in the Kul Tirans' deaths.[3]

Priscilla had been planning to usurp Katherine as the ruler of Kul Tiras, having her company create Azerite weapons which were then shipped to the Irontide Raiders who she hired to attack the Proudmoores. Katherine had heard the rumors about Priscilla just like anyone, but whether out of fear or loyalty she chose to ignore them. Taelia and the Alliance emissary spoke to her to reveal the truth about Priscilla's plans to usurp the Proudmoores, but Priscilla admitted to all of it and then escaped the scene by igniting a smokescreen.[2] Although the attacking forces from the Ashvane Trading Company were dealt with, Priscilla herself ultimately got away by jumping into the sea when she seemed cornered.[5]

Priscilla eventually returned with a full fleet of Irontide Raiders, and a handful of tidesages, in an attempt to lay siege to Boralus. After clearing the city of enemies, Katherine gave Jaina her father's pendant, which she used to call forth the legendary Kul Tiran fleet, which until then had been captured in a magical storm by the Tidesages. The fleet, led by Tandred, proceeded to surround the Irontide ships. Outnumbered, Priscilla surrendered.[6]

Ashvane was imprisoned in Tol Dagor, and some time later the Horde sought to break her out; ironically enough, part of the Horde team doing so was Rexxar, the same half-ogre who killed Daelin. Although Ashvane went with them she was no fool, and knew Sylvanas Windrunner only freed her because she wanted something. Nevertheless, she agreed to discuss their mutual interests.[7]

After Queen Azshara used the Tidestone to drag Alliance and Horde ships into Nazjatar, Priscilla was found in a position of authority among the naga armies, indicating, to the disgust of both factions, that she was now allied with Azshara. Later, the player and their allies found she was providing the naga with plans and schematics for Azerite weapons previously produced by the Ashvane Trading Company. When confronted, Priscilla started to panic as her bodyguards were cut down, first promising to call off her assault (which was quickly being decimated), and when that offer was ignored, pleaded to Azshara for help. The naga queen complied, rescuing her from the adventurers while telling her she won't let Priscilla die before she has "fulfilled your destiny".[8]

During the assault on the Eternal Palace, Azshara fulfilled her end of their bargain. As the adventurers watched, the Queen granted Priscilla the power she had always desired, but did so in a method that Priscilla clearly did not expect, transforming her into a powerful yet hideous, inhuman monstrosity. A battle ensued, in which the adventurers finally slew Lady Ashvane, putting her out of her misery.

Lady Ashvane is the powerful Matron of House Ashvane and seeks to bring Boralus under her control. With an arsenal of azerite[sic] weapons at her command, she will obliterate anyone who stands in her path.