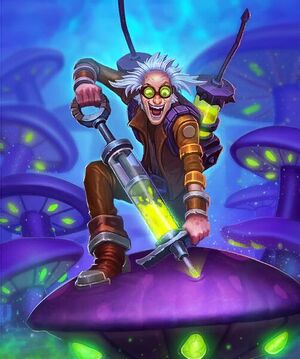 Professor Slate is a mad scientist found in the Viewing Room in the Scholomance.

Slate has the following abilities: 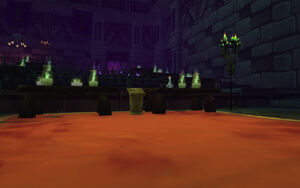 Polyformic Acid Potion on Slate's table after his defeat

This is a very straightforward fight. The only ability non-tanks need to be aware of is the Toxic Potion he throws on the ground every ~15 seconds or so that lasts for 10 seconds. Simply move out of it and keep damaging the boss. At roughly 30%, he will quaff a potion, increasing his size and damage dealt, but that damage increase is only used against the tank. He will keep throwing toxic potions while buffed, but otherwise the fight is as it was.

Once he has been defeated, interact with the

[Polyformic Acid Potion] on his table to gain an hour-long buff: "Your attacks and spells have a chance to cause additional Nature damage to the Darkmaster's minions. WARNING: Results unpredictable in event of imbiber's death."