Profiting off of the Past 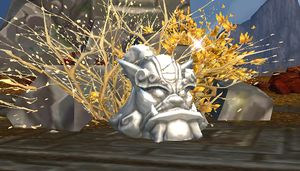 Let me guess, you're here to deal with the mogu statues that are being reanimated. What a coincidence, I'm here to, um... conduct research on the mogu.

I tell you what, if you bring me as many of the mogu relics in there that you can carry, I'll give you a cut. Of the research... funding.

Where am I going to be able to put all of the relics?

<Bao Jian's eyes widen with anticipation of the proceeds from the relics.>

Now that you've softened them up, I'm thinking that I might head in. Just a few more relics from around the outskirts. Nothing dangerous.

Bao Jian says: Hello, friend! Can I interest you in the deal of a lifetime?

[87] Deanimate the Reanimated, Bao Jian at the southeast side of the ruins offers this quest. Pick it up before killing too many of the constructs. Relics litter the ground and are held by the Terracotta Warriors and Guardians.

On return to Bao Jian before collecting all 12:

How goes the relic retrieval, <name>? I hope those mogu statues aren't giving you too much trouble.
After collecting all 12:
Bao Jian says: That's a lot of mogu relics. We're going to be rich!